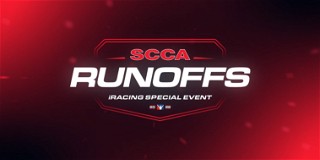 The 2022 SCCA National Championship Runoffs just wrapped at VIRginia International Raceway on Oct. 2, but the excitement is far from over, with iRacing’s virtual SCCA Runoffs poised to race on a digital VIR playground starting Oct. 17. Come Oct. 22 – following five days of qualifying – racers and fans alike will be treated to eight solid hours of the best virtual racing around – and you’re invited to race or watch!

Sporting eight classes that match or mimic SCCA Road Racing classifications, Oct. 17-21 of the 2022 iRacing SCCA Runoffs will include qualifying sessions held once every four hours, with drivers holding a D class road license or above eligible to race their way into Saturday’s Super Sessions.

The best of the best from those five days of qualifying sessions will be invited to race in class battles on Saturday, Oct. 22. What time will those classes race on Oct. 22, and how do the classes align with SCCA’s existing classifications? This chart will help:

How do I Race?

The first step is having an iRacing account, and the second is holding at least an iRacing D class road license (which is one step beyond Rookie – find out more here).

After that, registering for the iRacing SCCA Runoffs is your next step. For that, head to iRacing’s Special Events Calendar page and click the forum button for more information.

SCCA had dipped its toe into virtual racing series prior to March 2020 with the SRF Challenge on iRacing, though it was the pandemic that saw SCCA’s sim racing concept rapidly turn into reality.

While physical events were shutting down for an unknown period of time in March 2020, SCCA, iRacing, and Club members like Steve Ray who were passionate about sim racing joined forces to host virtual SCCA races, with the first digital green flag dropping in late March 2020.

Today, we gather in person as we did prior to the pandemic, but what hasn’t changed from early 2020 is that SCCA virtual racing lives on – and this year, there’s the iRacing SCCA Runoffs.