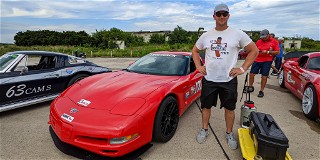 If American muscle cars and competition are your thing, then the Tire Rack SCCA Peru CAM Challenge at Grissom Aeroplex in Peru, IN, was the place to be over the Aug. 11-14, 2022, weekend.

Hosted by the Indianapolis Region, the event saw more than 170 entries during the celebration of the Classic American Muscle classes of the SCCA Autocross world. CAM Sport hosted 28 of those, a whopping 46 came in the Contemporary category, and CAM Traditional brought nearly 40 entries, with 50-some more entries coming in invited Xtreme Street and Index classes.

Day one of the CAM Challenge featured runs on the same course, just like a traditional Solo National Tour event. With a minimum of eight trophies available in each CAM class, every run had the potential to move a driver up in the standings.

In CAM Sport, Ron McManus had the two fastest runs of the day in his Corvette. Dipping into the 41s not once, but twice, while everyone else sat in the 42-second range, McManus claimed the win with 1.686sec to spare.

CAM Contemporary proved that, if you can drive, you can drive – no matter the car. Typically found behind the wheel of his SSC-class machine, Jimmy Vajdak upped the size, horsepower, and grip to take the CAM-C class win in a Camaro by 0.486sec over Mike Leeder.

Two autocross heavy hitters duked it out in CAM Traditional, with Sam Strano’s 1998 Camaro topping Matthew Braun in a 1970 Chevelle by just 0.326sec.

The Xtreme Street classes were also given an invitation to this year’s CAM Challenge event, and they responded in droves. With 30 cars in XSA and eight more in XSB, competition was tough all over. At the end, Alek Tziortzis topped Xtreme Street A and Dallas Reed took Xtreme Street B class wins.

Following three qualifying rounds on slightly cooler Sunday morning, the field was set for the CAM Challenge showdown and the special Xtreme Street Challenge. In the end, Matthew Braun triumphed to win the CAM Challenge Shoot Out for the fifth time in eight years. Kevin Keys was second after his win in CAM-S and Karl Riggs was third after his win in CAM-C. Dallas Reid won the XS Shoot Out.

With a successful CAM Challenge complete, event organizer and spiritual CAM guru Raleigh Boreen asked the autocross community to put the second weekend of August onto a 2023 calendar for the return of the CAM Challenge in Peru, IN.