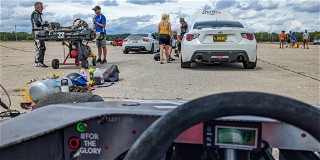 That’s it! Wave the checkered flag! The regular season for the 2022 Tire Rack SCCA ProSolo Series is done, and all that’s left is the Lincoln Finale on the eve of Tire Rack SCCA Solo National Championships.

A solid 132 drivers made runs in their last chance to score ProSolo points or improve their tier standing in advance of the ProSolo Finale registration, or just get a final jolt of competition under their belts before summer winds down and school begins.

The Howard Duncan Greenlight Fund recipients, offered free entries for their first ProSolo starts, were Connor Jurs and Rich Mangus. Jurs finished sixth in the Street 1, while Mangus was scored in ninth in CAM.

Donations made to the SCCA Foundation can be earmarked for the Greenlight Fund here.

The biggest fear on Sunday was the weather – and how long the rain would hold off. Good news: The rain shower waited until the last car came off course for class competition, was brief, and disappeared before the Challenges began. In short, the rain cut a great time at the light and was gone before anyone knew it.

In “that’s how it’s supposed to work,” Solo Spec Coupe was a tight battle for the podium finishers. Billy Davis held off a hard-charging Jimmy Vajdak to take the class win by 0.294sec, with Jeff Jacobs finishing third, another 0.075sec back.

The Race Tire Index ruined the MacLeod family dinner on Sunday night, as Jason Hobbs put his FM Novakar J9 on top of the MacLeod family shifter kart by 0.327sec. The old man still kept his alpha status, however, as papa Larry MacLeod was second ahead of young Jackson.

Bonus Challenge: License? We don’t need no stinkin’ license! Actually, that’s the one requirement of running a Solo event. Which meant that Olivia Hammac had to run with her father in the passenger seat, as she had only held her learner’s permit for three weeks. No matter, she rolled through the Bonus Challenge to take the first of possibly many wins.

Ladies Challenge: Meredith Brown was untouchable at Oscoda, topping Ladies Class 3 in her SSC Scion FR-S and then rolling through wins to take the Ladies Challenge. Brown topped Dina O’Donnell, the Ladies 2 winner, in the final.

Super Challenge: The Super Challenge finale came down to an accessible turbo twin versus pure American muscle, with Jimmy Vajdak improving throughout the weekend and nailing the challenge runs to take the victory. He topped David Feighner’s CAM class Ford Mustang in the final to earn the full points, with Bartek Borowski taking third in the consolation run.

It’s time – the Lincoln ProSolo Finale nears, with the chance to settle the season-long scores. Tier 1 registration for drivers with 34 or more points in the class opens this Thursday, Aug. 11, at 3 p.m. CDT; Tier 2 and Tier 3 registrations open on the following weeks, respectively.