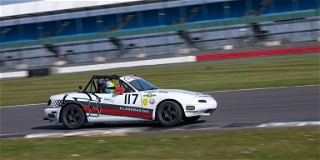 Austin Varco might be less than two years into his SCCA membership, but he’s hardly standing still. Since joining the Club in October 2020 as a member of Cal Club Region, he hasn’t stopped moving. Within a month, he took to the Spec Miata grid in Cal Club Region’s Pacific Coast Road Racing Championships at Auto Club Speedway, racing more in 2021. In 2022, he committed to a full season, competing in six SCCA race weekends that included a stop at Portland International Raceway for the Hoosier Racing Tire Super Tour. Then he went racing in England.

“The BRSCC MX-5 Championship is nothing short of the same amazing racing we see stateside on all rungs of Mazda’s competition ladder,” Varco wrote on a post on MazdaMotorsports.com. “The drivers are aggressive, opportunistic, calculated, and ready to pounce at a moment’s notice. After the race is over, they’ll help you fix your suspension, find your cell phone, or offer data and hospitality. Ultimately, 5,500 miles away or not – it’s the same experience you’d find at any Spec Miata paddock.”

In the article, Varco pointed out several of the differences between the British Racing & Sports Car Club MX-5 series and Spec Miata found in the SCCA. “[The cars] are significantly lighter (2100 lb with driver), run no hard top, factory parking brake, bolt-in cage, stock clutch, softer suspension, shaved street tires, and obviously inverted controls for an American driver,” he noted, adding that he ended one race with a bruised right hand from smacking the driver’s side door while attempting to shift gears.

The BRSCC also utilizes standing starts, something completely new for Varco. The experience of his first standing start, he wrote, was less than stellar.

“I yanked up on the parking brake, gently found the biting point of the clutch, and revved the motor to 1,000 rpm too high. As the lights illuminated, I looked in my side view to see if I could see the flagger maniacally waving the green – the way you see on TV. It was exactly how I imagined it would be. I was so caught in the glory of it all that I missed the start, launched a little too hard, and did a burnout down the entire front straight at Silverstone.”

Read more about Varco’s international racing experience by following the link below.