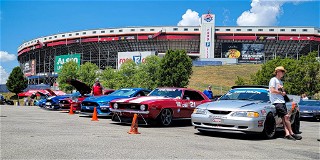 The weekend was Southern hot and humid, but the rain and lightning held off until the second part of the very last heat on Sunday. That kept the rest of the weekend competitive and on schedule, including the Region-hosted cookout on Friday night.

It’s Bristol, baby, so you know the Tire Rack ProSolo action is going to be rough and tumble, back and forth, and extraordinarily close.

In C Street, Will Teller crushed his final run of the weekend to bump his way to the class win by just 0.02sec over first-day leader John Wolf. E Street was similar, with Cory Barr tossing down a run early in the second day to take a preliminary lead, but Joseph Cote jumped from fourth all the way to the win with a strong left side run for a 0.052sec class victory.

By definition, Solo Spec Coupe should be a tight fight each and every time. Consequently, it was no surprise that Mike Ferchak and William Bostic traded blows to the finish, with Ferchak up by 0.013sec after the final runs.

But it’s Bristol, so we’re also looking for big, loud, and thunder on the pavement. CAM came through, where Corvette drivers Eric Peachy topped Jeff Dobbins by just 0.102sec after all the math was complete.

The Howard Duncan Greenlight fund, named for the SCCA Hall of Famer and SCCA staffer credited with growing the ProSolo program, is supported by the SCCA Foundation and offers free entries to select, first-time ProSolo entrants. Dan Olesinski and Mike Brown were this weekend’s recipients. Olesinski had a solid run in CAM, while Mike Brown found himself in a good news/bad news situation. A broken car during the ProSolo Launch School prior to the event meant he didn’t get to compete in the ProSolo; with several ProSolos still remaining in 2022, Brown will have plenty of opportunities to put his misfortune behind him and make a successful return.

For those interested, donations made to the SCCA Foundation can be earmarked for the Greenlight Fund here.

Ladies Challenge: The Ladies Challenge came down to Kim Whitener and Laura Marcus, after both won their respective Ladies Index classes – Marcus in 2, Whitener in 3. Holding onto their seeds through the bracket, Whitener’s STS Miata bested Marcus’ FP Camaro to take the crown.

Super Challenge: Miata isn’t always the answer, but Miatas did win each of the three Challenges at Bristol – including for Marcus Pyne in the Super Challenge. Pyne topped Geoffrey Wolper to advance to the finals, where he bested Rob Clark for the win.

Two days of autocross action at the ProSolo wasn’t enough, so the event rolled over to a Tire Rack Solo National Tour on Saturday and Sunday, concluding in time for everyone to celebrate Monday’s Independence Day at home.

When the clutch slave cylinder in Jon Nwanagu’s Camaro failed after his first run on Saturday, he jumped into Alan Schoonmaker’s 1969 Camaro to carry away the CAM-T class win. CAM drivers in general had a good weekend with Wilwood and Ridetech drawings for prizes. John Nwanagu won the Wilwood certificate and Randy Adkins won the Ridetech certificate at Bristol.

Remember the rain that held off until the end of the weekend? During the lightning delay, STR agreed to end their weekend and let the results stand. Elsewhere, however, DS, HS, AM, and CSL all ran after the delay as there were some contested trophy spots yet to decide. Hats off to the 15 volunteers who stayed to work course so that all could get their full slate of runs in. Jonathan Clements (technically A Mod, though it was a conglomeration of all the Modified classes at Bristol), Alex Piehl (DS), Cameron Goode (HS), and Layne Lindemann (CSL) all made the most of their time, taking wins.

All six trophies in the 18-car Solo Spec Coupe class were covered by less than nine-tenths of a second, with Ferchak doubling up on his ProSolo win with a Solo National Tour title.

Of note from the Solo National Tour weekend was that Justin Peachy, who finished second in X Prepared in his Corvette, won the Roscoe Spirit of Solo Award at Bristol. Meanwhile, Bryan Nichols had the opportunity to compete in E Street thanks to VETMotorsports.

Registration is open for both events, so sign up today!