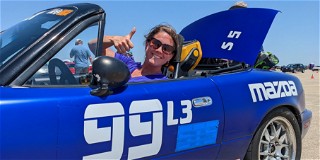 The June 26-28, 2022, Tire Rack SCCA Lincoln ProSolo – otherwise known as the opening salvo of the Spring Nationals weekend – saw 211 drivers take runs on the spiritual home for the SCCA Autocross program, and the results didn’t disappoint.

Because the event features a ProSolo followed by a Solo National Tour, at the site of both the Tire Rack ProSolo Finale and Solo National Championships, this weekend’s ProSolo drew a championship-level field for competition. And dare someone doubt the progress that has been made on the ProSolo program in the past year, an incident that took out the finish lights during runs caused but a slight six-minute delay before returning to action.

It was a family affair in the overall standings at Lincoln, with the top indexed times coming from the Race Tire 1 indexed class. Zak Kiesel got the best of dad Jeff and the rest of the field, taking the top spot in class and index by just 0.016sec at the close. They were followed by the MacLeods, with father Larry 0.206sec back of Jeff, and young Jackson MacLeod just 0.007sec behind that.

Not close enough for you? Street 1 has you covered, and kept the “shared name” theme alive. Craig Wilcox topped the class, but was just 0.004sec in front – quicker than the blink of an eye – over Randall Wilcox (not related, at least closely). Not good enough? Raymond Dsouza was 0.016sec (about the blink of an eye) behind in third. For those who want the details, that is an SMF-class Civic, an SSM Miata, and a BSP Miata, in order of finish.

The Howard Duncan ProSolo Greenlight Fund, provided by the SCCA Foundation and named for the SCCA Hall of Famer and SCCA staff member credited for growing the ProSolo program to what it is today, awarded two free entries to the event to give additional SCCA members an opportunity to attend their very first ProSolo. Kyle Green, driving an E Street Miata, and Aldo Flores, driving a Scion FR-S in Solo Spec Coupe, were this weekend’s recipients – but were joined by 16 other competitors experiencing their first ProSolo event. (For those interested, donations made to the SCCA Foundation can be earmarked for the Greenlight Fund here.)

Bonus Challenge: Samantha Bray got a shot at the Bonus Challenge after finishing 14th in the Ladies Class 3 index, so why waste the opportunity? She rolled off three consecutive wins, including topping Russell Blume in the final round, to take the Bonus win.

Ladies Challenge: Ladies 3 was clearly filled with ringers. For evidence, in addition to Bray’s Bonus Challenge win, Kim Whitener topped the class and carried that through the Ladies Challenge for the title. Who did she top in the final pairing? Jennifer Bedell, who finished fourth in (all together now!) Ladies Class 3.

Super Challenge: James Yom’s Porsche GT3 rode the momentum from running second in the Street 3 index (surrounded by fellow SS-class cars) through the Super Challenge for his second Super Challenge win of the season (following Fontana).

EV Challenge: This year’s new EV Challenge headed to the Spring Nationals, although due to the number of EV entries, this one began and ended with the final round. There, Erik Strelnieks in a Tesla Model S Plaid topped Tommy Pulliam in a Tesla Model 3.

ProSolo Heads To The Short Track

The ProSolo field gets a much-deserved month off before returning to action at one of the most well-known venues in motorsports – Bristol Motor Speedway in Bristol, TN. True, the Tire Rack ProSolo event takes place on the outside of the famed oval, but the action should be just as hot. The event will take place June 29-July 1, and registration is open.