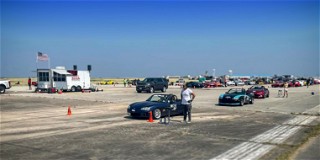 The SCCA Solo “Road to Lincoln” reached the midway point of its 2022 points season with the Tire Rack SCCA South Texas Solo National Tour at Chase Field in Beeville, TX, on May 5-8, with a solid 138 drivers using the Kerry Caughlin-designed courses over two days of competition. Unseasonably warm temperatures greeted participants throughout the weekend, with highs pushing 100 degrees F all weekend. Hot? Yes. But the action on course was even hotter.

The Houston Region-hosted event borrowed a page from the Tire Rack SCCA Solo National Championships for Friday night’s welcome event, where Lone Star Region hosted “Tacos Without Talent,” allowing competitors to mingle before the action kicked off on Saturday morning.

Naval Air Station Chase Field, or just “Beeville” to those in the know, is quickly becoming the premier site in the southwest, with a large area to run on. This showed in the competition, which included more than 20 first-time competitors to a Solo National Tour event. This event also saw Chris Dunn win the event's Rosco Racin' Spirit of Solo Award for exemplifying what Solo is all about. Thanks to Forgeline Wheels, Dunn received a trophy and a complementary entry into another National Solo event.

Everything is bigger in Texas, and the big motors of CAM-C had the largest field in the CAM category. Of the 19 contemporary (mostly) Mustangs and Camaros, Jacob Crow set the bar with a 1.451sec win in his 2016 Ford Mustang.

Street Touring Xtreme was the mark for closest competition at Chase Field. Brian Maskrey trailed co-driver Kevin Brewer after day one, but made a huge leap forward on the second course to take a 0.100sec win in class. No word on how they’ll split up those contingency prizes.

Event co-chair Dan McCelvey put on a clinic in Street Touring Roadster with his Mazda MX-5. Not only did he win the class by just over four seconds, but he topped the PAX index for the event as well. Co-chair and co-driver Laurie McCelvey finished just out of the trophies in fourth while also successfully managing the event.

Halfway Through the Points Chase

There is a points chase going on this year at each of the first 10 Tire Rack SCCA Solo National Tours on the schedule. An individual’s three best-scoring performances count toward the season total.

With the top three events scoring, drivers are starting to fill out their dance card and establish the scores to beat. With a good cross-section of events remaining, we expect the standings to shuffle, especially come the Tire Rack SCCA Lincoln Solo National Tour at the end of this month.

Learn more about the scoring system here, and you can track the points race throughout the Solo National Tour season here. (Note: Points are usually updated a few days after each event.)

The lone true opportunity for autocrossers to measure themselves and their car against other National-caliber drivers at Lincoln Airpark returns for its annual Memorial Day stop. Known colloquially as “Spring Nationals,” the event features a Tire Rack ProSolo on Friday and Saturday, followed by a Tire Rack Solo National Tour on the Sunday and Monday of Memorial Day weekend. Join us for one or both events on May 27-30.