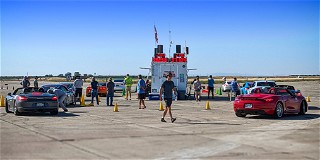 Another Tire Rack SCCA ProSolo event lit up the starting line on the West Coast during the April 29-May 1, 2022, weekend, this time in California’s Central Valley at the popular Crow’s Landing site. The Naval air station saw 154 drivers recording runs in the competition under blue skies and temperatures in a warm but comfortable 80-degree range. Drivers were welcomed to the site, known for its wide-open layouts providing for fast, flowing courses on high-grip concrete, with a San Francisco Region-hosted pizza party on Friday night.

Sunday morning began with a comeback in Ladies Class 2, where Tara Shapowal blasted past Shelly Monfort to take the win. Shapowal took a first-run lead in her Porsche Cayman GT4, but Monfort had snuck ahead until the final runs for both drivers.

Ladies Class 3 saw a dramatic move on Sunday morning. Annie Gill was third, trailing Nicole Wong and Catherine Tran as the sun set on Saturday night, but a big Sunday morning move from Gill in her Scion FR-S launched her to the top of the class.

The McKee family Mazda RX-7 took the top two spots in the Race Tire Index 2 class with Andy in first and Teresa second, but it wasn’t without drama. Andy’s first run on Saturday afternoon was the last run for that particular differential in the RX-7, as it let go during the run, damaging the gas tank in the process. The tank was repaired and the diff replaced in time for Saturday’s dinner, with flawless runs on Sunday.

The Howard Duncan ProSolo Greenlight fund, provided by the SCCA Foundation and named for the SCCA Hall of Famer and SCCA staff member credited for growing the ProSolo program to what it is today, awarded two free entries to the event to give additional SCCA members an opportunity to attend their very first ProSolo event. Connie Lu and Lisa Gnesa were this weekend’s recipients, both running in Ladies Class 2.

Ladies Challenge: In Julie Woodbury’s three runs in the Ladies Challenge, she twice overcame a one-second deficit on the first run to take the win. That included the final against Monfort to give Woodbury her first Challenge victory.

Super Challenge: When it came to the Super Challenge, it was Jonathon Lugod standing as king of the hill. Lugod broke out by over four tenths in the final round, driving Adrian Cardenas’s Mazda RX-7, to win the Challenge over Manfred Reysser.

It’s a quick turnaround for the SCCA ProSolo staff, who will have the Tire Rack SCCA Charlotte ProSolo ready to go at zMax Dragway in Concord, NC, just five days after the California ProSolo wrapped. The series then heads up the East Coast for the Tire Rack SCCA New Jersey ProSolo, May 20-22, before the big spring event at Lincoln Airpark during Memorial Day weekend.