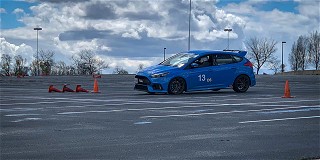 More than 220 competitors showed up at FedEx Field near Washington, DC on April 8-10, 2022, for the Tire Rack SCCA WDCR Solo National Tour. The clouds didn’t fully break on a cool, blustery weekend until the final runs on Sunday, but the action on course was smokin’ hot all weekend.

A Glimpse at the Competition

Spec Solo Coupe saw the top four drivers trade the lead multiple times, but it was Tony Savini who threw down the final gauntlet to take a half second win over Chad Englert. Both marched around day one leader Mike Ferchak, who finished on the last step of the podium.

Jacob Ronald, in the STU “Fiata” came back from one second down on day one to squeak past Evan Clavijo, his codriver, by a scant 0.007sec. In STX, Lenworth Woolcock piloted his RX-8 to a commanding five-second victory in class. Not only did he handle his class competitors, but nearly everyone else as well – the run propelled him to second overall in PAX for the event.

Robert Lewis pulled out a commanding lead in C Prepared on day one, but day two saw Derek Latshaw keep him honest and get it done cleanly, running within a tenth of a second. Latshaw ended up as the meat in a Lewis podium sandwich, with Tracy Lewis jumping to third by a scant 0.008sec over Mike Snyder.

Ed Lange was another driver who led their class wire to wire, taking the win in E Street by 0.828sec. Heidi Ellison and Paul Kozlak laid down the only sub-63 second runs in class on day two to leapfrog from fourth and fifth to second and third, respectively.

Mike Casino and Justin Peachey went back and forth all heat long for the lead in X Prepared. Ultimately, Peachey set the fast time of the day, but it wasn’t enough to overcome the day one deficit to Casino. Casino took the class win by 0.206sec.

Course designer Sam Strano held the lead in F Street pretty much from the word go on Saturday, and he kept the lead on day two, putting 1.792sec over second place’s Dave Montgomery, with Jon Caserta and Jason Felty rounding out the trophies.

There is a points chase going on this year at each of the first 10 Tire Rack SCCA Solo National Tours on the schedule. An individual’s three best-scoring performances count toward the season total.

Learn more about the scoring system here. You can track the points race throughout the Solo National Tour season here. (Note: Points are usually updated a few days after each event.)