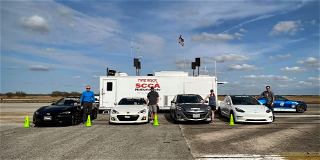 In November 2021, the runway and access roads of Naval Air Station Chase Field in Beeville, TX, were used to conduct the final Tire Rack SCCA ProSolo of the year. It was a test event of sorts, because that configuration had not been used previously. The experiment went well, so the site was used again this past weekend, March 18-20, for the 2022 Tire Rack SCCA South Texas ProSolo.

Located about 90 minutes south of San Antonio and hosted by the enthusiastic and well-prepared Houston Region, 137 competitors were greeted by absolutely fabulous conditions for SCCA’s second ProSolo of the year. With its fantastic concrete surface similar to that found at the Tire Rack SCCA Solo National Championships, doubled with a town that warmly welcomes competitors with plenty of restaurants and lodging options, Beeville is rapidly becoming a “must visit” on the Solo schedule.

Two asymmetrical courses were used this weekend – one was open and fast, with the other a bit more technical. Combined, they produced a fun experience with close results. Drivers got eight runs on Saturday, four on the left course and four on the right layout, followed by another four runs on Sunday, two being on the left course and another two on the right. The Challenge portion of the ProSolo weekend then wrapped up Sunday afternoon.

After the first eight runs on Saturday, Layton Cater led Mason Herrick by 0.778sec in Solo Spec Coupe. However, Cater couldn’t duplicate that performance on Sunday in a 2013 Scion FR-S as Herrick fought back in his 2016 Scion FR-S to take a 0.233sec victory. Eric Davis, Cater’s co-driver, claimed the third and final trophy position.

Street Touring Roadster also saw a swap at the top over the two days after Daniel McCelvey, in a 2019 Mazda MX-5, constructed a lead of 0.332sec over Corey Phillips on Saturday. Phillips, however, stormed back on Sunday in a 2020 Mazda Miata to eventually take the win over McCelvey by 0.825sec in the five-driver field.

The seven-entrant Street Touring Xtreme field showcased a great battle. Saturday closed with David Hedderick, in a 2002 Acura RSX, holding a lead of 0.388sec over Brian Maskrey, wheeling a 2013 Scion FR-S. Sitting another 0.341sec behind in third was Brandon Slater in a 2015 Subaru BRZ. Things changed substantially on Sunday as Slater greatly improved his performance to earn a 0.182sec victory over Hedderick. Silvio Zucchet, in a 2014 Scion FR-S, moved up to claim the third trophy spot.

Boasting 25 drivers, the largest class of the weekend was the combined Classic American Muscle (CAM) group. Eric Sutton, in a 2020 Ford Mustang, had to make a come-from-behind charge on Sunday for the win. Jeremy Foley, driving a 2008 Chevrolet Corvette Z06, climbed his way from seventh on Saturday to take the runner-up spot by Sunday’s close. Mark Madarash was third in a 1988 Pontiac Trans Am, Jay Cryderman earned fourth in a 2013 Ford Mustang GT, and Chris Fletcher finished fifth in a 2020 Ford Mustang. The final two trophies went to Jacob Crow in a 2016 Ford Mustang, and Eric Peachey driving a 1997 Dodge Viper GTS.

In Ladies 2, Megan DePietro switched from her normal Super Street R Chevrolet Corvette to an E Street 1999 Mazda Miata to take victory over co-driver Casey Coughlin. And in Street 3, Andy Neilson edged out co-driver Chris Levitz by 0.003sec for the class win.

EV Challenge: With more and more electric vehicles being used in SCCA Solo competitions, a new EV Challenge has been established for Tire Rack SCCA ProSolo events. The first EV Challenge took place in Beeville, and the winner was Cameron Goode in a 2020 Tesla Model 3 over the 2021 Tesla Model S Plaid of Troy Acosta.

Bonus Challenge: The eight-entrant Bonus Challenge came down to Pat McCelvey driving a 2019 Mazda MX-5, and Kasey Pierce in a 2017 Ford Focus RS. Pierce red lighted on the left-side course, which opened the door for McCelvey to take the Bonus Challenge victory, which comes with free entry to another ProSolo as a reward.

Online registration is open, or is just about to open, for these events. Check the Tire Rack SCCA ProSolo webpage for more information.