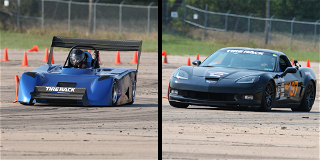 Driver of the Year honors are presented to competitors who demonstrated exceptional skill or overcame major obstacles to produce an outstanding performance at the Tire Rack Solo Nationals Championship. During the 2021 event, Ellam had a sizable lead in B Modified (BM) on day two going into final runs. He could’ve easily rested on his laurels, but instead pushed himself to find even more time on course in his Omnifab Cheetah. Impressively, Ellam picked up over a second on that final run, sealing his fourth Solo Nationals Championship in BM over the last six years. He also earned the overall PAX crown by a significant margin, and claimed Fastest Time of the Day honors for the entire event by more than three seconds!

Matthew grew up around autocross and appears to be following the footsteps of his father, Tom, who is a multi-time Solo Nationals Champion and previous recipient of the Driver of Eminence award. Matthew started out in karts and quickly adapted his skills to multiple cars in “Stock” classes as a teenager. Now as a Driver of the Year, Matthew’s name joins a list of winners such as Bryan Heitkotter, GJ Dixon and Mark Daddio.

The Solo Rookie of the Year award recognizes an outstanding performance by a driver with limited competition experience during a first Tire Rack Solo Nationals Championship appearance. Indeed, Glover made his first run at Solo Nats in 2021 driving a Chevrolet Corvette Z06 in A Street. That class had 41 competitors, and Glover came home second just 0.198 second off the leader. An incredible performance to be sure.

SCCA autocross competitors from the Steel Cities Region, however, were not shocked by Glover’s accomplishment. While fairly new to autocross, Glover had experience hoofing a Chevrolet Camaro at drag races. According to fellow competitor Alex Piehl, he did a ride-along at an autocross and found himself hooked. After running SCCA’s CAM a bit in his Camaro, Glover took the wheel of a Corvette for a “fun run” in 2019 during a local autocross. That led to the purchase of a Z06, and he went on to win the Region's 2020 Most Improved Driver award.

Glover now joins the Solo Rookie of the Year winners list that includes names such as Bryan Heitkotter, GJ Dixon and Mark Daddio — aces mentioned above who later claimed Solo Driver of the Year honors.

Both awards will be presented at the winner’s first National Solo Event of 2022.