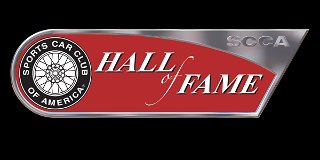 The opening day of the SCCA National Convention, held virtually and for free for all SCCA members again in 2022, was capped on Friday night by introducing some of the Sports Car Club of America’s biggest contributors with the induction of the 2022 Hall of Fame class and presentation of the Woolf Barnato and Member of Excellence Awards.

SCCA President and CEO Michael Cobb introduced the night before the ceremony rolled right into the Hall of Fame inductee class. This year’s class represented a full scope of members who continue to call SCCA their racing home, with success on and off the track.

Charlie Clark, introduced by his friend and fellow Hall of Famer Bill Johnson, earned his honor for his well-rounded SCCA career. Off-track, Clark was instrumental in the development of ProSolo, supported new members to the Club, and served on numerous Boards, including the SCCA Board of Directors. Behind the wheel, Clark was a long-time competitor in both the autocross and road racing programs.

“I appreciate this honor a lot,” Clark said. “I don’t know that I deserve it, but I appreciate it. The reason that I joined SCCA in the first place was to drive cars. That is what’s driven me in the Club since the start. I hope to continue to do that!”

If Clark started the ProSolo program, Howard Duncan was instrumental in elevating that program, along with the Tire Rack National Tour, to the level it is today. First as a volunteer in his home Region and then for 30 years as a staff member, Duncan led the Solo and RallyCross programs. Fittingly, Duncan was also instrumental in launching the SCCA Hall of Fame. He was introduced on Friday night by his friend, Raleigh Boreen.

“Even after learning of this honor over two months ago, I still find this a bit surreal given my role in the Hall of Fame project over the last two decades,” Duncan said. “Never once did I envision myself at center stage… I always viewed the contributions I was making as doing my job. Having a significant impact of the Club should be expected of you, especially in a leadership and management role over 30 years.”

Like his fellow classmates, Paul Pfanner has been instrumental in the SCCA’s growth and one of its biggest cheerleaders across the motorsports world as the publisher of SportsCar Magazine and RACER Magazine. As the official magazine of the SCCA, SportsCar has become the clubs largest marketing piece. Pfanner was introduced by the first SCCA President he had an opportunity to work with, fellow Hall of Famer Nick Craw.

“It is truly one of the greatest honors I can imagine to be inducted into the SCCA Hall of Fame, especially with such a great group of inductees,” Pfanner said. “It is a privilege to share this special moment with you. Little did I know when I arrived at the gate of Riverside International Raceway in the early morning of October 5, 1969, that this was the first day of my long SCCA journey to my destiny.”

Greg Pickett has won Trans Am races in five different decades, and continues to race today. As a driver, his wins make him a Hall of Famer; as a business man, his Muscle Milk company became the title sponsor and helped relaunch the series after a dormant period – adding to his contributions to the Series’ storied legacy. Pickett was introduced by Trans Am Race Company President and CEO John Clagett.

“Now I’m in my mid-70s, but I’m still hungry, active and passionate as ever about this Club and, especially, the Trans Am series,” Pickett said. “I’m so grateful for the nomination, let alone your acceptance of me the SCCA Hall of Fame. It’s nothing I ever dreamed of accomplishing.”

Mark Weber ran two SCCA Hall of Fame careers concurrently. On the track, Weber has run more than 600 SCCA road races and holds the record for most Runoffs starts at 63 and counting. Track side, Weber spent 50 years as a photographer at SCCA events, recording road racing’s activities on slides and into the digital era like no one before or since.

“President Mike Cobb called me a couple of months ago and said the best part of his job was informing people that they were going into the SCCA Hall of Fame,” Weber said. “Well he was talking to me! I was pretty overwhelmed at the time, and I still am. It’s been an incredible couple of months.”

Following the official induction of the SCCA Hall of Fame class, two other high SCCA honors were presented.

The Member of Excellence award is presented annually from nominations from the membership, and comes with a trip to any motorsports event, anywhere in the world, through a generous grant from an anonymous member. This year, George W. Laws, Jr. will take the trip.

“When Peter Jankovskis called to inform me of this award, I was speechless,” Laws said. “Later, a myriad of thoughts and words filled my head – honored, proud and energized among them… To the Board of Directors and everyone with me along the way who helps make the SCCA so successful, two words: thank you.”

The event ended with the presentation of the Woolf Barnato award to Rich Bireta, given annual to the member who has made the most outstanding long-term contribution. Winners are nominated by the last three recipients and approved by the Board of Directors. 2021 winner Dennis Dean presented Bireta with the award. Bireta was recognized for his work with the Rally program – including the development of apps that make RoadRally more easily undertaken by competitors and workers to put on the event.

“I’ve had the privilege of attending half a dozen SCCA Conventions over the years during my time on the Rally Board, and I know and appreciate the significance of this award,” Bireta said. “Thank you for this honor. Please know it is very much appreciated and will be cherished.”

The SCCA Convention continues through the week, hosting free seminars and town halls for SCCA members. Attendance to the virtual convention is free. More information can be found here.