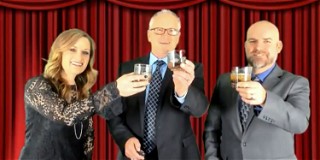 The following awards were presented, recognizing standouts for their skill and dedication to the SCCA road racing program in 2021.

The President’s Cup, originally presented by U.S. President Dwight Eisenhower and now presented by current and past SCCA Presidents, recognizes the driver demonstrating ability, competitiveness and success at the National Championship Runoffs. This year’s award, selected by the Stewards of the Meet, Runoffs Race Director, head of Road Racing and the President of SCCA, goes to Troy Ermish.

Ermish won the GT-3 class at the Indianapolis Motor Speedway, flipping his fortunes after a test-day rollover left his car in bad shape and seemingly unable to compete. After repairs, Ermish rebounded to take his second career National Championship.

Jim Fitzgerald Rookie of the Year

The Jim Fitzgerald Rookie of the Year award is presented to the Road Racing driver showing the greatest promise as evidenced by driving performance, selected by the Club Racing Board based on nominations submitted by the Executive Stewards.

Fifteen-year-old Connor Zilisch earned the 2021 award, adding his name to past recipients Mark Dismore, Eric Curran, Sean Rayhall and 2020 recipient Simon Sikes, among others. In just his first season in cars following a successful karting career, Zilisch finished ninth in the Hoosier Super Tour standings while running in the incredibly competitive Spec Miata field. He capped his impressive season by qualifying third in the 84-car class at the Runoffs, then finishing on the podium during the race.

Named after Jim Kimberly, former President and Governor of SCCA, The Kimberly Cup is awarded to the SCCA driver showing the most improvement in the last year, selected by the Club Racing Board.

Tim Kezman earned the 2021 award in his most successful season to date. He received his Novice Permit and competition license in 2014 and has been a stalwart at Hoosier Super Tour events, and beyond, ever since. Though he had landed on the podium at the Runoffs, 2021 was a leap forward when he claimed the GT-2 National Championship, in the rain, at Indianapolis.

The John McGill Award is presented annually in recognition for significant contribution to the Road Racing Program. The winner is chosen by the Club Racing Board and the head of the Road Racing department.

Though a racer on the track, Frank Schwartz earned the 2021 award for his efforts off the track to promote class growth throughout the season and at the Runoffs. Schwartz first turned his efforts to promoting B-Spec in 2018, where in just four seasons he helped grow enthusiasm and participation from 85 Majors entries to 263. In the same time frame, Runoffs entries climbed from 14 to 61, becoming the third-largest class at the 2021 Runoffs. More recently, he turned his attention to Formula Continental, which added 18 entries in 2021 from just one season prior.

The David Morrell Award is presented to recognize an active Steward in the Stewards Program who has exhibited outstanding performance and dedication to the sport and its highest principles. The recipient is selected by the Chairman of the Stewards and the Executive Stewards.

Kevin Coulter was named the 41st recipient of the award after becoming a National Steward in 2009 and has been a part of the Stewards staff at the Runoffs since that time. In 2015 he was selected to be an Executive Steward for the Central Division and since 2018 has been the Executive Steward’s liaison on the Stewards Training and Development Committee.  He was awarded the Steward Worker of the Year in 2017. He serves as one of the Hoosier Super Tour Clerks of the Course as well as the Clerk of the Course for the Runoffs since 2020.

Mechanic of the Year

Often unsung heroes of the sport, the Mechanic of the Year recognizes the unseen but necessary efforts behind the scenes to keep a car running strong on the track. The award is chosen by the technical staff at SCCA and the Road Racing Board based on submissions to SCCA.com.

Chris Garcia, of Bulldog Motorsports and the San Francisco Region, earned the 2021 award for his work on the prototypes of Jim Davenport and Tim Day, Jr., among others. His own team described hm as a world-class problem solver, and noted that he takes personal pride in ensuring each car is meticulous in preparation and race-ready. The ultimate professional, he has delivered championship-winning race cars, working hard and maintaining a great attitude in the process.

The full video presentation can be seen below.