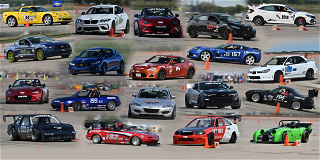 Created in 2009 to recognize driver excellence through the course of a competition season, the Solo Triad is one of the most difficult awards to earn in SCCA competition. Past winners include David & Kim Whitener, Mark Madarash, Shelly Monfort and a veritable list of who’s who in Solo National competition. Although the criteria have varied a bit over the years, a Solo Triad Award is earned through a triad of accomplishments.

Ladies could substitute a Ladies Index win for a Tour or ProSolo win if their class didn’t meet the size requirement at that event. Another factor in 2021 was the trio of events following Nationals. The Championship Tours in Charlotte, NC and Moultrie, GA along with the ProSolo in Beeville, TX gave competitors three additional chances to secure the award.

If it sounds hard, that’s because it is. Winning a Solo Triad requires commitment and excellence throughout the entire season. A single “off” day often makes all of the difference. Yet, 19 very skilled drivers pulled it off in 2021.

The 2021 Solo Triad winners are as follows:

Solo Triad winners receive a special trophy, and their names are entered into a drawing where one lucky person receives a free SCCA Lifetime Membership. The winner of that drawing for 2021 is David Whitener.

Congratulations to all the accomplished 2021 Solo Triad recipients! Watch for an announcement on the 2022 criteria, coming soon.