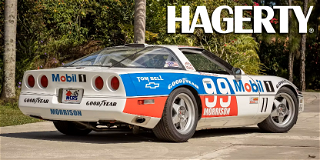 Among the many reasons our friends at Hagerty are a wonderful partner to the SCCA is that they love #FunWithCars just as much as we do – and they are a wealth of knowledge on a variety of car-related subjects. The following article originally appeared on Hagerty.com. For this and all of Hagerty’s car-related content, visit their media site here.

We do not bring you this ensemble of soon-to-be-auctioned Corvettes simply because they’re red, white, and awesome. (Though they are.) True, this January’s run lists include trackside veterans that have represented Chevrolet on the world stage, not to mention an L89 convertible that belonged to a famous astronaut, but Corvettes taken together are a force to be reckoned with in the collector market. Corvettes, and in particular the 1963 through ’67 years, account for more dollars sold at car auctions than any other model. For context: A single Ferrari 250 GTO might sell for $48.4M, but sales of all ’63 through ’67 Vettes would together surpass that.

There are many interesting and genuinely special Vettes up for auction this January, split between auctions in Kissimmee, Florida, and the greater Scottsdale area in Arizona. These include Benchmark-certified split-window Z06s and an experimental C4 suspension prototype, plus a slew of other fascinating race cars. We focused, however, on the specific cars that you aren’t likely to see again any time soon. Without further ado, here are eight extraordinary Corvettes to whet your appetite for historic fiberglass.

John Henricy did more than preside over the Corvette Development Group at GM’s proving grounds, or merely serve as Corvette assistant chief engineer. He got behind the wheel, too, helping to build Corvettes’ motorsports prowess nearly a decade before the Pratt & Miller factory-backed team emerged in 1999. Henricy campaigned this C4 in the 1990 SCCA Escort World Challenge Series for the Mobil 1-sponsored Morrison Motorsports. That name is likely a familiar one to Vette aficionados: The same year that Henricy was campaigning this C4 in World Challenge’s first sprint-race season, Tommy Morrison and his team set the 24-hour world speed endurance record in a stock ZR-1 with an average of 175.885 mph, breaking the 160.18-mph figure that had stood for nearly 50 years.

Henricy and Morrison have both since been entered into the Corvette Hall of Fame, and this C4 has received equally prestigious honors: It participated in the 2013 Monterey Historics and sat on the lawn at The Quail that same year. Today, its 370-cubic-inch V-8—based on a Dart block and boasting 227-cc CNC cylinder heads and a four-barrel 850-cfm carb—is fresh from a disassembly service at Predator Performance, which included new pistons, rings, rod bearings, valve springs, gaskets, and seals. This C4 boasts a lot of pedigree for a relatively modern car and, judging from the spec sheet, is raring to go once more.