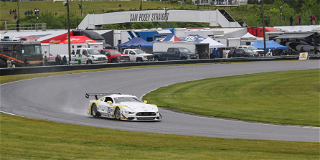 Second in a two-part series

Anyone who has seen Chris Dyson running his #20 ALTWELL CBD Ford Mustang in person knows that the car has a distinctive, urgent, almost insistent sound.  Being a Track Marshal means I’ve listened to the car many times at Lime Rock Park, from many different corners, and it never fails to astonish me.  I’ve also heard the car through a fairly good home theater sound system in race broadcasts, and it is simply not the same experience.  You have to hear -- and feel -- this car in person to understand its uniqueness.

The car screams.  It wails.  It is distinctly unlike the snarl of any other TA car out there.   The team has run the car with mufflers on occasion to meet noise restrictions, and the decibel reduction didn’t seem to make any difference to the basic nature of the acoustic signature -- what a musician might call the engine’s timbre.

During my recent visit to the Dyson Racing shops in Poughkeepsie, NY, I asked Chris about the incredible sound of his car.  I theorized that perhaps his team had found a new firing order that causes that strange and wonderful yowl.

“It’s actually funny you should say that,” he said.

“Late in 2018, going into 2019, our engine builder had been talking about making a change to the exhaust configuration.  He wanted to go with an 8 into 1 setup, and do it in a more optimized way.  The first time out with it, we went to COTA down in Texas.  I think everybody thought we were running 10,000 rpm, because the engine just screams.”

“It’s got the most distinctive acoustic signature of anything racing in the United States right now, if not the world,” he continued.  “And it’s a crowd pleaser.”

That’s a huge statement.  I’ve heard all kinds of racing cars, both modern and vintage, in all kinds of settings, and on many continents.  Although I’ve heard dozens of cars whose sound I absolutely love, I’ve never heard any car that would make me disagree with Dyson’s claim.  It is subjective of course, but if you’ve been lucky enough to hear this car run in person, you know that what Chris says is true.  If you haven’t heard the car live, and find that this raises your eyebrows with doubt, you need to find a way to hear this thing running in anger.

“With these Trans Am cars we’re talking about a sheer wall of sound, and ours in unmistakable,” he said.  “The funny thing is that in the driver’s seat, I don’t hear it like an outside observer does.  People love it.  Even when we were testing in Atlanta last fall, the track General Manager came out of his office and said, ‘What is that?’  It just draws people to the track.”

I asked whether he meant, literally, that eight individual exhaust headers were all dumping into one singular collector.  A true 8-into-1 exhaust.

“Correct, and I can show you what I mean,” he replied.  “We re-profiled it from what we had originally, and that not only brought some power but it brought that distinctive sound that everyone seems to love.”

“Nobody has copied it.  I’m not really sure why, but we’re pushing our program pretty hard.”

“One of the things that’s great about Trans Am is that it may be the last bastion of real team innovation and creativity,” he said.  “The rulebook is prescriptive, but not restrictive.  What I mean by that is that it has the right guardrails around it -- particularly around materials and certain things that would really drive costs and investment -- but it’s a rev limit, it’s a displacement limit, and it’s a weight limit.  Beyond that, Trans Am has spec bodywork.”

“But you can change a lot on the fly.  It’s not like this has to go before a U.N. panel to get certain components approved for use.  These are not FDA-compliant vehicles.”

When Dyson told me about the 8-into-1 exhaust, I tumbled right away to torque as the driving factor in this novel approach.  We all have a tendency to think of any car in terms of one single horsepower number.  I often do that myself simply because it is the jargon of the game.

But horsepower isn’t everything.  Torque, particularly in road racing, is the dominant measure of success.  Because of the constant need to maximize acceleration out of every corner, across the rpm range, road racing in particular rewards an engine builder who takes every advantage to develop a measurable torque curve that shoots up at low rpms and continues, generally, as a plateau through the engine’s mid-range and on into the upper range of the engine’s rev capability.

I asked Dyson whether it was the torque curve that drove the innovative exhaust configuration, and whether the sound was simply an unintended side effect of achieving that torque.

“Yeah, you’re absolutely right,” he replied.  “The headline power is one thing, but the torque is really what you use when you’re on the track.  And it’s finding that balance.  The more power you have, the more aero you can run, the less efficient you are really forced into being.  I think the power is still very important, but it’s the drivability.”

He described the engine builder’s motivations behind the engineering exercise.

“You’ve seen it around Lime Rock, too,” he continued.  “These cars don’t have traction control, and that’s one of the central appeals of Trans Am.  It is unbridled monster cars that never stop accelerating.  That’s a lot for us as drivers.  Pirelli has built us great tires, but it’s a spec tire.  And there’s no computerization.  So the onus is on us as drivers, on me, to apply that to the road and to get the car set up in such a way that the forward drive is best.  Traction is king.”

“And I think that’s in a lot of ways what makes the series so appealing from a driver’s standpoint.  You can still make a really big difference.  That’s true from the team standpoint as well. “

“You’re starting with a lot of fuel on board, too,” he continued.  “You’ve got 35 gallons of fuel that you’ve got to make last.  You’ve got one set of tires.  You’ve got no pit stops.  You have no way of regulating tire pressures.  There are no resets, no reboots.  Whatever you go into those hundred miles with is what you’ve got.”

“I think what that encapsulates is the ability for all elements of the team to contribute.  The idea that we’re still free to develop.  I have to hand it to the Trans Am series, they’ve staked out TA1 as one of the areas where innovation is encouraged.”

“Trans Am wants these cars to be the fastest road racing GT cars anywhere.  And we’re heading that way.”

You’ll get your chance to hear Chris Dyson’s screaming TA car in person at the traditional Lime Rock season opener.

As in the past, the expanded Trans Am family is slated to appear.  And, again next year, the Sportscar Vintage Racing Association (SVRA) is scheduled to be represented by a variety of historic and vintage cars, from open wheelers to tintops.  The International GT field rounds out the planned sessions, with large groups of Porsches, Ferraris, and other notable GT cars on track.

For those of us addicted to the sights, sounds, and pleasant aromas of racing cars running hard and fast, that means virtually nonstop sessions all day each day of the Trans Am Memorial Day Classic (Friday, Saturday, and Monday).

Andrew Johnson is a from-the-cradle motorsports fanatic that has followed sports car racing since childhood. As a young boy, he often stood at the magazine rack to read titles such as Sports Car Illustrated and Road & Track while his mother shopped for groceries. He has been a corner worker for Lime Rock Park (and occasionally for the Rolex 24 in Daytona) for many years. This is the first in a series of columns he has created relating to Lime Rock Park in particular and to sports cars and motorsports in general.