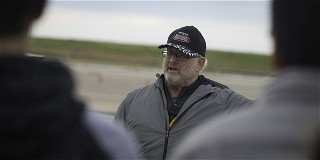 Howard Duncan, who has been part of the SCCA Solo Department for more than 30 years, announced his retirement from “full-time” SCCA employment during the 2021 Tire Rack Solo Nationals.

While his list of accomplishments and service to the Solo community is long and worthy of many honors, Duncan isn’t quite done yet. To assist with a smooth transition for new leadership taking the reins, Duncan will remain on staff in a part-time role serving as Senior Advisor to Solo through the fall of 2023. And during that year, Duncan will celebrate the 50th running of Solo Nationals and serve as Grand Marshal at that momentous milestone event.

When reflecting on his service to the Club, Duncan said, “Over my years with SCCA, two things have constantly given me joy and satisfaction. The first being time on the road. I got to see and experience so many portions of this country. But more importantly, I had a lot of opportunity for creative thinking and problem solving on both big and small topics. Completely immersing yourself in a topic and looking at it from multiple angles, then coming up with a solution or new approach always made me feel like my time on the road was well spent.

“The second item which has brought me joy is actually an outgrowth of the first,” Duncan continued. “While the stress of putting on events weekend after weekend can be exhausting, all it took was one member to say they thought it went like clockwork, then I could hardly wait to begin setup for the next National Solo event. That feedback really energized me for the next road trip and got me thinking about how we could make an event even better the next time around.”

Brian Conners approached the SCCA Foundation and the SCCA’s Solo Department about an appropriate way to celebrate Howard Duncan's three decades of extraordinary dedication and leadership. This led to the creation of the Howard Duncan ProSolo Greenlight Fund, announced during the 2021 Tire Rack Solo Nationals Welcome Party. Initial funding of $7,500 for this new SCCA Foundation program was generously provided by Brian Conners. Other individuals can also support the Howard Duncan ProSolo Greenlight Fund through donations to SCCA Foundation, and a donation option will be added to next year's ProSolo online entry form.

Jeff Jacobs, SCCA Foundation Chairman, said this fund will be used to provide free ProSolo entries to select SCCA members who are attending their first ProSolo, thus removing a cost barrier to bringing new members into ProSolo. Details about criteria for nominating a ProSolo first-timer, and how awardees are chosen, will be announced soon.

“We anticipate providing two free entries at each ProSolo event starting in 2022,” Jacobs said. “The Foundation is working with the Solo Department to create an online nomination process that will be formally announced as we get closed to next year’s competition season.”

“Howard Duncan has given so much to the Club and Solo community over three decades,” Connors said. “I felt there needed to be something with Howard's name attached to it that centered on giving others an opportunity to participate. This fund allows the ProSolo community to show support by giving others a chance to experience the excitement of a ProSolo, and providing that opportunity in Howard's name is a perfect fit.”

Check back to SCCA.com in the coming months for an update on the process for nominating individuals for the Howard Duncan ProSolo Greenlight Fund. And don’t forget donations to SCCA Foundation can be made anytime throughout the year. Just click the button below.