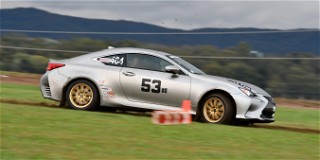 For the first time in the event’s 15-year history, the SCCA RallyCross National Championships are being held in Ohio, running this weekend in Chillicothe at the Ross County Fairgrounds. The hard pack surface was put to the test after rain fell on Friday afternoon and continued into the evening. Saturday morning runs began on slick grass, which quickly became mud. By the third run group, the sun had dried the mud and allowed drivers to start finding grip.

To mitigate some site degradation, both of Saturday’s courses started on pavement, eliminating the highest-maintenance section of a dirt course. Traditionally, launches cause deep rutting that must be monitored and regularly adjusted. With the first 8-20 feet of these courses on asphalt, that concern was virtually eliminated.

Doing it For the Boys (and Girls) Back Home

It’s no surprise that Ohio leads the 126 entries with 27 representatives hailing from the event’s hosting state, but there are others well represented. Michigan sent 22 drivers to their southern neighbor and Pennsylvania is represented by seven competitors. Six drivers call each New York and Kansas, “home” while five came from Maryland. Kent Hamilton wins the award for furthest distance traveled, making the trip from Anchorage, Alaska.

Below are provisional class leaders following the first two competition sessions at the 2021 SCCA RallyCross National Championships along with the car, competitor hometown and current interval to second place.

You will be able to follow along during all of the action – with live timing and audio – at rallylive.scca.com.