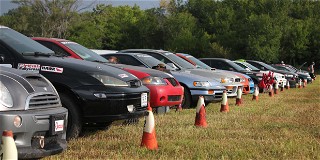 On Friday, October 15, the best RallyCrossers from across the country will converge on the Ross County Fairgrounds in Chillicothe, Ohio to determine who will be the 2021 SCCA RallyCross National Champions.

Friday will be mostly business with registration, tech and class inspection, with a bit of practice tossed in. The real fun kicks off Saturday when competitors try their luck on two different courses. Competition will continue Sunday on a third.

Though the fairgrounds have been the host venue for several National Challenge events, this is the first time the National Championship has been held at the site. With many championship hopefuls treading on unfamiliar ground, the race to the top may be determined by who can acclimate to the surface the fastest.

The event will kick off on Friday afternoon when the practice course opens for runs. For those who have not run on the surface at the fairgrounds before, this will be their opportunity to dial in car setup and make tire selections for competition runs. Then, competitors will have the opportunity to walk the first Saturday competition course before and after the driver’s meeting and class inspection. Following class inspection, it’s time to visit with friends—old and new—at the welcome party and town hall meeting. Those who have run the Tour events will recognize the great BBQ provided. Competitors are encouraged to bring some of their favorite local liquid fare to share, along with their favorite paddock games.

After Saturday competition, there will be plenty of down time to head off site and explore the area. Fans of racing on two wheels will be delighted to know there’s a motocross event at the fairgrounds on the same weekend as RX Nationals. The course is on the south side of the fairgrounds within sight of the paddock.

If motocross isn’t your speed, attendees can find some offsite rally-related entertainment as many of the roads used for the Southern Ohio Forest Rally are just a few miles away. For those who would prefer to find some non-racing-related activities, the town of Chillicothe is just a few minutes away and offers plenty of bars, restaurants, and other amenities. We recommend trying the frozen custard stand down the road from the site.

A Challenge for Champs

For the first time in the 15-year history of RallyCross Nationals, all class champions will have the chance to race head-to-head on equal terms. After class competition concludes on Sunday, there will be a Race of Champions featuring each individual class winner in a similarly prepared vehicle. The ride of choice for this race will be a Sierra RX3, provided by Sierra Cars

The RX3 is a purpose-built, single-seat, tube frame chassis car that blends asphalt and off-road capabilities. It is powered by a Suzuki Hayabusa engine tuned to 200 horsepower which puts its power down through a six-speed sequential gearbox. With a curb weight of only 925 lbs., the RX3 can hit 60 miles per hour in under three seconds and can reach a top speed of over 120 mph. That impressive spec sheet should make for a fascinating battle between each of the 2021 RallyCross National Champions. Each Sierra RX3 will be outfitted with Alpha Racing Tyres courtesy of Kraken Racing Concepts.

If you’re a fan of camping at site during race weekends you’re in luck! Camping space is available and plentiful at the fairgrounds. The cost is $25 per night and includes electric and water hookups. There are also brick and mortar bathrooms at the site, complete with showers—an important amenity after a long day playing in the dirt.

After determining that the Ross County Fairgrounds would be the site for the 2021 National Championship, the Ohio Valley Region hosted a local event at the site to test the surface degradation issues and to experiment with a few course layouts. The event was held in June to give the surface a chance to recover fully before the National Championship. You can ride along with Dan Shea and Ryan Miles in their Can-Am X3 to scope out the test courses here.

The 2021 SCCA RallyCross National Championship is sure to be filled with plenty of close competition and camaraderie. With a capped-out event and classes filled with great cars and drivers, the anticipation is building for what should be one of the most memorable RallyCross Nationals to date. Don’t miss out!

If you can’t make it to Chillicothe for the event this year, you can follow along from home. Just like our other National Championship events, live timing will be available on our website.