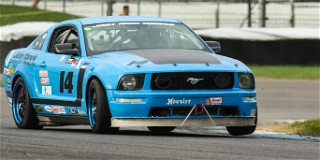 A two-driver breakaway made American Sedan one of the most entertaining races so far in the 2021 SCCA National Championship Runoffs at Indianapolis Motor Speedway. James Jost and Amy Aquilante were the class of the 31-car field as the duo — both representing the Philadelphia Region of the SCCA — waged an intense duel for the gold medal presented to each class winner at the Runoffs.

Jost, from Allentown PA and driving a Ford Mustang, finally prevailed by 0.771 second over Phoenixtown, PA resident Aquilante. But Aquilante gave him all the pressure he could handle in her bid to become the third female National Champion in 58 years of SCCA Runoffs competition.

Gregory Eaton led the first six laps from his outside row starting spot, but Aquilante, who started third, stayed close in his wheel tracks. She executed a clean pass for the lead into Turn 7 and pulled out a gap while Eaton and Jost scrapped over second place.

Jost took the position on lap 10 entering Turn 1 and set off in pursuit of Aquilante. On the 12th lap, she encountered traffic and her margin reduced to less than a second. Two laps later, Aquilante locked her brakes into Turn 10 and the two leaders raced hard through the next few corners, with both drivers recovering from tank slappers to continue.

The duo continued down the pit straight into Turn 1 and, through the next sequence of turns, with the Mustang and Aquilante’s Pontiac Firebird banging doors until Jost finally eased ahead. Aquilante continued to challenge Jost on the final few laps, and launched one last attack on the final lap, but was unable to make the pass.

This is Jost’s first SCCA National Championship, and he also earned the SCCA Super Sweep, which is the most difficult title for an SCCA driver to reach. To earn the award, a driver must win the Runoffs, a Hoosier Super Tour point title, and a U.S. Majors Tour Conference championship, all in the same class in the same season.

“I started here at Indianapolis; 2017 was my first Runoffs,” recalled the winner. “To come back and win is just awesome. We had a great time out there. Amy was tough to get around and we finally bumped a little bit. We kept it together and once we got around, I tried to not look in my mirror because she was right there on the bumper the whole race.

“It was fun,” he added. “I couldn’t breathe the last four or five laps because I was hyperventilating.”

Aquilante suffered a heavy crash in the Runoffs at Virginia International Raceway in 2019, then returned with a new car to claim third place in 2020 at Road America.

She established herself as a frontrunner at IMS and nearly claimed the victory. Aquilante’s sister, Beth, drove from the back of the field to finish seventh in the AS race, and her husband Kurt Rezzetano won Friday’s Touring 2 race.

“It feels amazing, and I can’t believe I get to be on the podium at Indy,” Aquilante said. “There are three Northeast division guys up here and I raced them all year, so I knew what to expect. I was ready.

“Jost and I had a great battle,” she added. “He got into me a little, I got into him a little, but we both kept going. I thought, ‘Let’s go!’ It was really fun. He drove an awesome race and really kept his tires under him.”

For two-time National Champion Eaton, this was the first time he finished on the podium at the Runoffs without winning. “I was hoping those two might tangle and give me a little help,” he admitted. “But Jimmy and Amy had a bit more pace today. Although I’m disappointed, I’m really happy for them.”

Andrew McDermid finished fourth in a Ford Mustang, while 16-time SCCA National Champion John Heinricy took fifth place in a Pontiac Firebird. Kelly Lubash claimed the Sunoco Hard Charger Award by moving from 24th to 14th over the course of the 19-lap race.