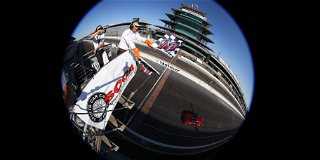 Scott Twomey’s long tow from Tacoma, Washington to the 58th running of the SCCA National Championship Runoffs at the Indianapolis Motor Speedway paid off on Friday with his first career gold medal in GT-Lite, escaping with a thrilling win over Chris Bovis, of Overland Park, Kansas. Michael Lewis, of Poway, California, finished third.

Twomey and Bovis went toe to toe around the 2.592-mile road course for 19 laps, with the knockout blow for Twomey’s No. 11 Poulsbo RV/Pat’s Autosport/Top Tech Nissan Tercel landing the final uppercut in the last corner of the race to pull out a 1.033 second win.

The race was a study in contrasts. Twomey was noticeably quicker from Turn 2 through Turn 6, and again from Turn 7 through Turn 13, but Bovis’ No. 78 Hart Marx Advisors/Schroth/Goodyear Honda CRX had the advantage on the straights.

“You really never know at the start of the race how it’s going to shake out,” Twomey said. “I didn’t know if Chris was going to check out and I had to get around Brian Linn so that I could get back up to Chris and to be frank, I didn’t think I’d catch up. When we started to go through the twisty stuff, I noticed that the gap would shrink a little bit, and when we got to the straight stuff it would extend just a tiny bit. But I think I was able to make up more ground than I was losing in the straightaways.”

Each time on the final two laps, Bovis took the lead going into Turn 1, but Twomey worked his way past in the long, flowing carousel that is the Turn 6 and 6a complex. The two were side by side in Turn 13 on the final lap and pushing hard, but Bovis didn’t have enough to stick the corner, slipped into the grass, and watched the win go to Twomey.

The win is a first for Twomey, who celebrates his first podium finish at the Runoffs.

“It’s a lifelong dream,” Twomey said. “I think it’s sinking in a little bit, but I don’t think I’ve got the full weight of it yet. Right now, if feels pretty wonderful to be up here and be in the middle of these guys here (Bovis and Lewis). They’re super talented and gentlemen; they are awesome race car drivers.”

Bovis grabbed his sixth podium at the Runoffs, and his second at Indianapolis Motor Speedway following a win in 2017.

Lewis beat a prolific run of west coast drivers for the final podium spot. The 10-time champion moved around two-time champ Brian Linn and fellow 10 timer Joe Huffaker, Jr. on lap 12 for his 21st career podium finish. The podium is Lewis’ first in the GT-Lite class.

We knew early on that we weren’t going to be able to compete with these guys, so I set my sights on a podium. We’re here to race. This is Indianapolis and we’re going to run as hard as we can. That’s what we did. And I bet — with the exception of this guy (Twomey) right here because he won — I bet I had more fun. I was in a pack of four or five cars, and I got to come out on top of that battle. That was really fun and I’m glad we had that opportunity.”