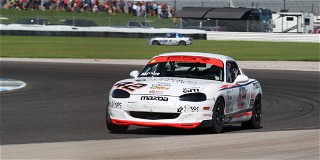 Pardus became the first person in class history to win the Runoffs for the third time, grabbing a 6.859-second margin of victory at the conclusion of the 19-lap race. The championship came in a track-capacity field of 72 Mazda Miatas, with others shut out of the feature race following Thursday evening’s last chance qualifying race.

After starting second, Pardus’ No. 42 Danus Utilities/East Street Racing Mazda Miata led a train of four around Tire Rack polesitter Brian Henderson at the beginning of the second lap. The race’s lone full-course caution came on the second lap of the race and when the race went green again on lap four, Pardus took advantage of the fight for position behind him and set sail.

“I was thinking about it last night and what the race was going to be like,” Pardus said. “2017 was kind of a pack race, and I thought that year you could separate from the field with two cars. The East Street guys brought a heck of a car this week through the infield and it allowed you to see nice gaps on people. It allowed me to break the draft when they started racing for second really hard. I knew I had to do it then with new tires on the car. I put down a few flyers right away and it got me two or three seconds. From there I was just trying to keep my head in the game. I don’t know if I’ve ever had a race like that where it was so mental. You can’t make any mistakes because if you do, you’re back in the pack.”

Pardus officially led 18 of 19 laps on his way to his gold medal. It was a break from his win a season ago, when he started deep in the field and pressed his way to the front at Road America for an equally, yet differently, impressive win.

“I didn’t win for a long time in this class,” Pardus said. “I know how hard it is to be up on this podium. I didn’t win a National for four years when I started. I wasn’t good like Connor right away; it would have been awesome to do that but I didn’t have it for the first four years. We came here in ’17 and won and you don’t know when you’re going to win or if you’re going to win again. Every time you get out there, I want to make sure it’s the best I can do.”

Bruni and Zilisch were in a five-deep pack battling for the final podium positions during the final 14 laps of the race. Bruni was out of the podium positions on lap 16, with his No. 6 Mazda Miata trailing Zilisch and Jim Drago as they crossed the stripe, with Brian Henderson and Kyle Greenhill still in the mix. He worked his way around both Drago and Zilisch and was running second at the white flag.

“Initially I was trying to check out and thought I could do it and get away, but I realized Connor and Jim were starting to hook up and run me down,” Bruni said. “I started to back it up a little bit, knowing that Jim was going to pick me up and keep me in front of Connor and I didn’t want to give them the run down the front straight. Connor got around Jim and I knew it was coming.”

Running a defensive line, Bruni kept Zilisch at bay and led a train across the finish line for his first Runoffs podium.

“I’m surprised I’m not in tears already,” Bruni said. “It’s taken 11 or 12 years to get up here and a lot of blood, sweat and tears and a lot of work to get into this position. It takes a lot on the track, it takes a lot off the track, and this is a moment I’ll be telling my kids and eventually my grandkids about for years to come. It’s a special moment.”

The No. 172 Panic Motorsports/Late Apex Storage Mazda Miata of Zilisch had maybe the most exciting drive of any of the podium finishers. Zilisch dropped from second to outside the top five in the first half of the race, then worked back toward the front. Running fourth, Zilisch moved around both Drago and Bruni with identical moves into Turn 12 on back-to-back laps with three and four laps remaining in the race, respectively.

It was an impressive debut for Zilisch, who started karting at four years old and was the first American to win the FIA Karting Academy Championship as a 14-year-old and is in his first season racing cars.

“I’ve had so much fun here at the Indianapolis Motor Speedway,” Zilisch said. “It’s so special to be able to race here at such a young age. Karting really has helped me and formed me into the driver I am today, and Spec Miata was such a good jump off. I’ve really enjoyed my time in Spec Miata and enjoyed racing with all the amazing people in the class. Being able to get a podium here is just amazing. I can’t believe I was able to do it. I came into the weekend hoping for a top 15, top 10 and coming away with a podium was way out of my expectations.”

Greenhill and Travis Wiley finished fourth and fifth, while Henderson, Chris Haldeman and Drago ran in the top eight after Drago and Hendrson slid off the track in the final corners challenging Zilisch for the podium. Elivan Goulart and Charles Mactutus completed the top 10 while Nick Stagl earned the Sunoco Hard Charger, improving an impressive 18 positions to finish 47th after starting 65th.