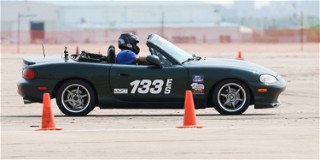 The final day of competition at the 2021 Tire Rack SCCA Solo Nationals still has plenty of close battles to be decided and more than a few folks making some last-minute repairs.

One of the closest battles of the week has been the four-way D Street scrap between Garrett Cogburn, Alex Piehl, Javier Reynoso, and Alex Muresan. The quartet Honda Civic Type R drivers are separated by less than two tenths from top to bottom. Cogburn is leading the way after day one, while Piehl is just a few hundredths behind, with Reynoso and Muresan hot on both their tails.

Other close battles still to be decided today include C Street Prepared and D Prepared. In CSP, Jacques Bene holds a scant .151 second lead over Jeff Schmidt in their respective Mazda Miatas. Bene was unable to improve his time on his third run, while Schmidt took over eight tenths off his previous best on his last look at the course, putting him within striking distance on day two. In DP, Todd Roberts holds a .173 second lead in his Mazda Miata over John Thomas in a Toyota Starlet. Thomas had taken the lead in DP on his third run on day one, only for Roberts to immediately snatch it back on his third.

C Prepared is also a very close fight with the unconventional car of Tommy Pulliam leading the charge, while his co-driver Robert Lewis holds down second. Though a Ford Mustang in the CP grid is a standard sight, what is under the hood of their car is far from it. CP is traditionally known as “the heavy metal class” with big ground-pounding American V8s, but Pulliam’s and Lewis’s pony is powered by a turbocharged inline-four. Ethan Bradbury, who was the early leader in CP on day one, has a similar power plant under the hood of his Ford Thunderbird.

E Street is not a class that’s known for mechanical carnage, but that doesn’t mean parts won’t be broken. Nicholas Zelisko and Jodie Boy were the unfortunate victims of such a failure when their clutch gave out on Zelisko’s final run. Thankfully, the pair were able to source a replacement at a local parts store and swap it in not long after nightfall. “We’ve done over a hundred runs in this car over the last month,” Zelisko said. “It must’ve been the 1-2 shift that did it because when I went to third through the finish, I had nothing.” Thankfully, the car was moving again under its own power this morning and seemed good to go. “All it needs to do is six runs and 562 miles home,” said Zelisko. “If it (the new clutch) can accomplish that, it was money well spent.”