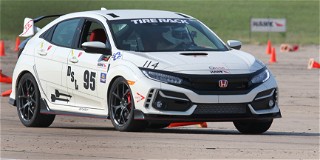 There are a variety of ways people choose to have #FunWithCars at the Tire Rack SCCA Solo Nationals. Some bring gadgets and games to entertain the paddock, while others show off their culinary skills by sharing their finest cuts of meat and their favorite local adult beverages. One of the more colorful ways members demonstrate their enthusiasm for the event is by decorating their cars with unique liveries. 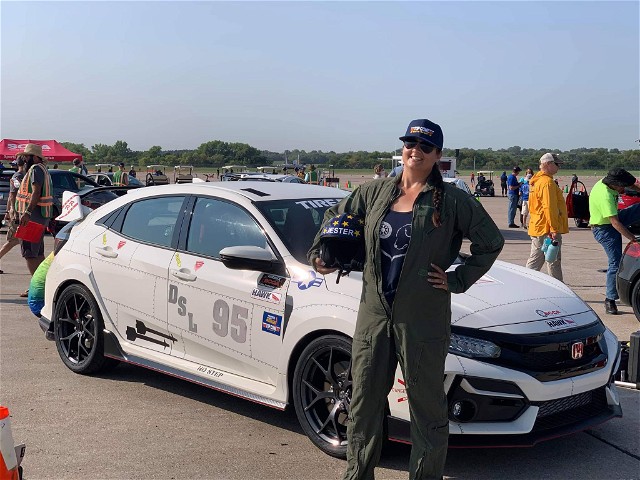 Stephanie and Javier Reynoso are one such pair of Solo stylists. The couple took the “Top Cone” theme of this year’s Solo Nats literally and turned their DS/DSL Honda Civic Type R into a full replica of an F-14A Tomcat fighter. “I really like Top Gun!” said Stephanie while holding her helmet decorated to look like that of Michael Ironside’s character Jester. “My first job was at a laser tag place, and we all had to have call signs. Everyone wanted to be Ice Man and Maverick, but I was like ‘I like Jester! He’s the teacher!’”

The car features a total of 600 “rivets” and a plethora of fighter plane paraphernalia. Stephanie explained, “we wanted to hit every single aspect of what’s on a fighter jet.” The Reynosos designed and cut the pattern themselves using grey pinstriping tape. “The whole car took about six hours to do on Saturday before we left for Lincoln.” Stephanie said. “Once you get in a rhythm with it, it really wasn’t that hard.” 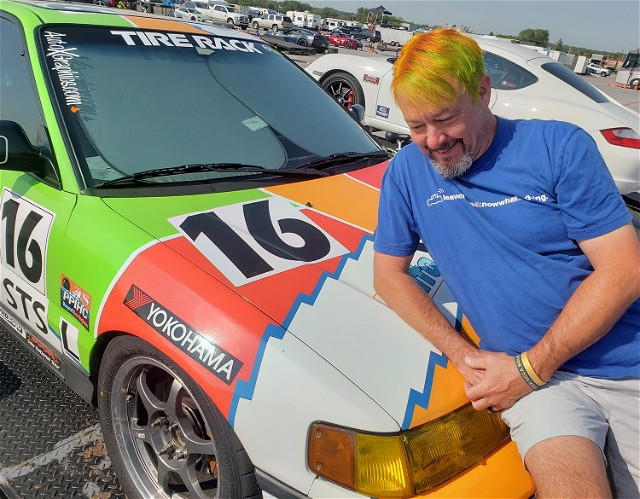 Another distinct livery in the paddock this week belonged to the STS Honda CRX of Mike Snyder. Snyder is the proprietor of autoxgraphics.com, and certainly showed off his capabilities with his latest example of custom creativity. “It is my business!” said Snyder when asked if having a fully decorated car helps with marketing. The inspiration for the livery came from a car that was in Gran Turismo. “In the game it was on a four-door Civic Ferio, which is what they call the Sedans in Japan,” Snyder said. “There were a couple of Honda factory racers that ran this livery in the early 90s in the Japanese Touring Car series.”

This is the third livery that has been on the car since it was first built in 2008. Previously, the car had a Gulf Oil theme, which was well liked throughout the paddock, but Snyder said he was ready for something different. “If I was gonna change it up, I wanted to really make it stand out.” Snyder also made himself stand out thanks to his matching dyed hair. “It's actually something I’ve been threatening to do for quite awhile,” said Snyder. “So I figured this year with the new livery I’d just go wild and do it.” 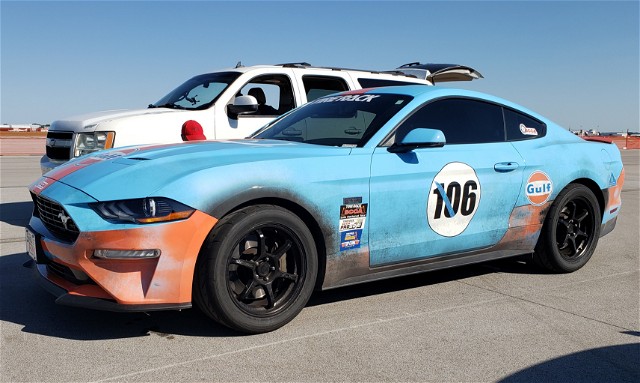 There are also more than a few cars in the paddock in Lincoln sporting variations of iconic racing liveries. One such example is the D Street Ford Mustang Ecoboost belonging to Kerry Emmert. Emmert’s Mustang features a full Gulf Oil livery which is intended to have a “distressed” look. “If you’re gonna come out here and beat on these cars like this, you might as well wrap them and make them look dirty.” said Emmert.

Emmert bought the car in March from Kansas City off the internet. It was a Lemon Law car, and at the time of purchase one of only three available in the country with the factory Ecoboost Performance package. The car left the factory with a dark blue hue, but Emmert decided he wanted something that looked more like a well-worn race car. “It's amusing to drive it on the street,” said Emmert. “You get a lot of folks turning around to get a look at it” 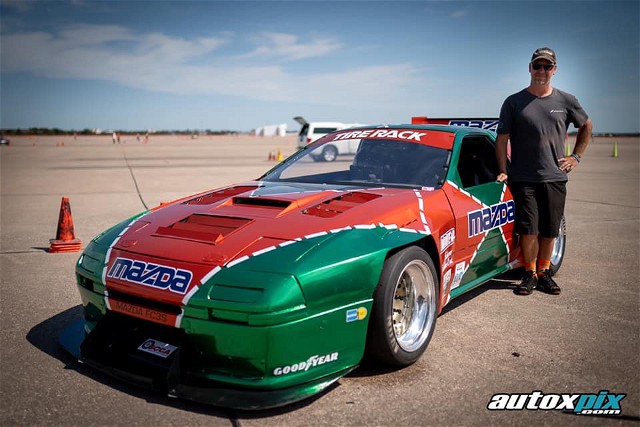 Another example of an iconic racing livery is the XP Mazda RX-7 of Tom Exley. Exley’s RX-7 is a tribute to Mazda’s famous 787B prototype racer which won the 1991 24 Hours of Le Mans. Exley has owned the car since 1990. Back then, it was his first daily driver after high school. He started autocrossing the car in 1996 in ASP and later BP before going all the way to the pointy end of the prepared classes in XP.

“I wrapped the car three years ago,'' said Exley. “It was originally Arctic Silver, but I felt like it needed some life and sparkle. I looked at a couple different options, but that livery is so iconic I just said let's give this a try. Go big or go home right!?” Exley is happy with the car’s current look, but he’s already thinking ahead to what he would like to do next. ”I think I’m going with the white and blue IMSA RX-7 GTO livery,” said Exley. Some Solo Nationals competitors turn decorating their cars into a team sport. The On the Ledge Racing (OTLR) team rolled into the paddock with a full spread of cars decked out with unique graphics. Daniel McCelvey explained “We went through a bunch of different ideas before settling on these. We like to go just a little outside the box.” McCelvey had done some pinstriping on his STR Mazda MX-5, but wanted to stand out even further from the rest of the STR grid. “I didn’t want to just be driving another white Miata,” he said. That desire led him to replicate a livery that would be instantly recognizable to fans of North American rally from the early 1990s: that of the famous Rod Millen Mazdas RX-7s’s and 323 GTX’s.

Every car in the OTLR paddock had a unique theme. “We’ve got a team group chat that is always popping off whenever someone is bored at work or gets a hair brained idea,” said McCelvey. The liveries also need to be approved by the team before they can go on a car. “The whole team has to sign off on it,” said McCelvey. The team’s full spread featured a Toyota 86 with vintage Toyota Racing Development graphics, another Mazda Miata with the famous Mazda IMSA GTO livery driven by Cory Phillips, who is here for his first trip to nationals. Another car in the OTLR paddock was the CAM S Dodge Viper driven by Andre Illick. If you think the car looks like the Viper GTS-Rs that terrorized road courses around the world during the 1990s, you would be correct, because the car started out as a GTS-R road racer.

“The car was bought brand new by Dick Turner who was a NASCAR Driver in the sixties,” said Illick.” He used to own Altamont Speedway which ironically is where I did one of my first SCCA events.” Turner road raced the car into his elder years until he sold it. The car changed hands several times until it landed on Bring a Trailer, where Illick noticed it had 335 wide tires in the front and immediately thought “that’s a CAM car!”

However, he did not win the BAT auction for it and ended up tracking the car down a few years later to, of all places, a used Tesla dealer. “I showed up, negotiated a deal, and drove it home on full slicks with open side pipes. Illick then began converting the car back to a street car from a full bore road racer. While he certainly didn’t choose the easiest path in CAM, that hasn’t dampened his enthusiasm. “It’s been a real challenge, but I've enjoyed the hell out of it! My theory is if you look good, you’re gonna drive good.”