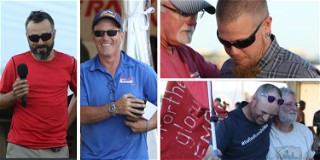 The largest autocross event in North America, the Tire Rack SCCA Solo Nationals draws people from far and wide to meet up for several days of competition and fun. And with everybody in one place at one time, SCCA’s Solo Program takes the opportunity each year to hand out some special, select awards so honorees can be recognized by the broader community.

This year’s recognition process was a bit unique. Because the 2020 Solo Nationals had to be scrubbed due to the COVID-19 pandemic, several annual awards were not handed out. That makes this year doubly special in a few instances where SCCA awarded both 2020 and 2021 awards. What follows is a rundown of those who received awards Wednesday evening.

The Solo Cup, which has been awarded annually since 1978, is presented to SCCA members who have made an outstanding contribution to the Solo events program. Winners are selected by the Solo Events Board from nominations submitted by the membership at large. Previous Solo Cup recipients include Jim Garry, Steve Hudson and Paul Brown.

The 2020 Solo Cup recipient is Tina Reeves of the Finger Lakes Region. Reeves was chosen because of her long history of competition excellence, which includes seven national championships, and active involvement in the Club. She served on the SEB, and chaired that group during a challenging time for Solo. Due to her efforts, several successful Solo Nationals Championship events were conducted in Topeka.

The 2021 Solo Cup recipient is Brian Conners of the Philadelphia Region. Conners was selected for his efforts as an Advisory Committee member, SEB member, and stint as SEB Chair. He took on an important role in as the National Solo Series Business Operations Engineer where he’s leading the process of root cause analysis, restart and standardization of the ProSolo Series across the challenges faced this year.

“There are big names associated with this award,” Conners noted. “I wasn’t expecting this. I do these things for the Club, for the community and for everybody. To be recognized by peers and friends, it’s overwhelming.

Driver of Eminence honors go to Solo competitors who consistently demonstrated excellence behind the wheel, and an exemplary degree of sportsmanship, dedication and unselfishness. The winner is selected by the Solo Events Board from nominations submitted by the membership at large. Recent Drivers of Eminence include Frank Stagnaro, Tom Ellam and Mike Maier.

The 2020 Driver of Eminence is Bartek Borowski of Chicago Region. Borowski earned this recognition due to many years of excellence as a competitor that have netted nine Solo national championships and two Solo Triad awards. He has also displayed a long history of sportsmanship, a willingness to help others improve, and positive contributions to the Club.

“This is unexpected and certainly very, very welcome,” Borowski said. “The community is the driving force behind doing everything that we do, and I don’t have any better way of sharing that than being here and competing tomorrow.”

The 2021 Driver of Eminence is Jeff Kiesel of Cal Club. Having earned 12 Solo Nationals Championships, and three Solo Triad awards, Kiesel is a top-notch competitor and car-prep wizard. He has also long displayed a willingness to contribute to the Club's success by donating various equipment — including high-end guitars as trophies — and lending his expertise as an Advisory Committee member.

“Wow, I don’t even know what to say,” were Kiesel’s words as he accepted the honor. “For me to be standing up here … it means the world to me. I just try to ‘bring it’ every time I drive and try to go for my best. You don’t know what this means to me. It means everything. Thank you so much.”

Johnson Spirit of the Sport Award

The Johnson Spirit of the Sport Award is awarded to Solo community members who bring the spirit of fun to their fellow participants, as symbolized by the message engraved on the perpetual award: "Johnson Spirit of the Sport Award, presented annually by the Royal Order of the Sheep to a member of the flock that upholds the spirited virtues of Fun, Camaraderie and Tomfoolery.” This award is named in honor of the inaugural recipient, Exalted Grand Shepherd, Roger E. Johnson. The award is selected annually by the previous three recipients, who in this case are Bryan Hayes, Tim White, and “The Eh Team” consisting of a group of competitors from eastern Canada.

It has been decided no Johnson Spirit of the Sport Award will be handed out for 2020, since that’s a year most of us would rather forget. But the 2021 Johnson Spirit of the Sport Award has been bestowed upon Team “For the Glory!!!” highlighting members Jeff Blumenthal, of the Neohio Region, and Kansas City Region members Dan Wheeler and Brad Smith. Almost as loud as the cars they drive, the cheers of “FOR THE GLORY!” can be heard far and wide at events with more than one class competitor. Along with having fun as the “black sheep” of the community, these competitors are self-sacrificing and can often be found helping their fellow competitors — whether in paddock or in grid in the heat of the moment.

This award recognizes someone each year who is undaunted by limited success over many National Championship events, but keeps coming back to enjoy the camaraderie, community, and hopes for a trophy in competition. Past Dick Berger Perseverance Award recipients include Raleigh Boreen, Bob Barone and Charlie Davis.

The 2021 Dick Berger Perseverance Award went to Phil Alspach of Ohio Valley Region. In 47 years of Solo Nationals competition, Alspach has only trophied thrice. But he is a “100 Percenter” in that he’s attended every Solo Nationals held to date, though that fact comes with a small asterisk as Alspach had to depart the 2001 event early. But he was indeed entered and was on site for a portion of the event.

Please note the 2021 Driver of the Year, 2021 Rookie of the Year and 2021 Rotheney-Koziak Cup awards have not yet been named. This year’s recipients of those awards will be recognized at a later date, so stay tuned!

The fun continues tomorrow from Lincoln with a new set of classes taking the courses at the 2021 Tire Rack SCCA Solo Nationals. Follow along at scca.com, and on Facebook and Instagram with @sccaofficial.