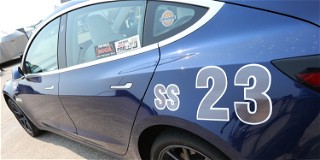 The Tesla car company has been producing electric vehicles for more than a decade. At launch in 2008, the company produced 147 cars. In 2020, just short of 500,000 vehicles were produced. That data certainly explains why more and more Teslas are seen on roads throughout the U.S. every day — and why we're seeing a growing number of Teslas in SCCA competition.

No Teslas ran at the 2020 Solo Nats. Of course, there were no Mazdas, Fords, Chevrolets or any other car since the annual event had to be cancelled due to the pandemic. But the Solo community is back in force this week at Lincoln Airpark in Nebraska for the 48th running of Solo Nats, and there are six entrants driving two different versions of Teslas this year — the Model 3 and Model S.

Matthew Grainger, 51, of SCCA’s St. Louis Region, is one of two Tesla drivers competing this year in the 36-entrant Super Street class. He has only owned his 2018 Tesla Model 3 since June, but has already used it at this year’s Tire Rack Time Trials Nationals Powered by Hagerty, and an August MiDiv Solo event at Lincoln Airpark. A 25-year SCCA member with autocross experience dating back to 1996, Grainger has wheeled several different cars over the years. But he’s truly digging his “ride” in the Tesla so far, a car he uses as his daily driver and drove to Lincoln for this week’s competition.

According to Grainger, the Tesla’s instant acceleration and speed are quite enjoyable out on course. The car’s automatic transmission also eliminates some of the decision-making other drivers face when it comes to gear selection during an autocross run.

“I just focus on driving and there are no missed shifts, no nothing. It’s easy,” said Grainger, who works as a manufacturing engineer in the EV industry.

Johanna Griest, a 34-year-old competitor from SCCA’s Detroit Region, joined the Club in 2016 and is participating in her third Solo Nats this year. Usually, she and her husband, Clint, share a Mazdaspeed 6 and run in the ESP class. However, that car has experienced some mechanical issues this year making it unavailable for use in Lincoln this week. So instead, Johanna will be running in Street Modified Ladies in a Tesla Model 3 Performance version supplied by Tom DeYoung. Never before has Griest hoofed a Tesla at an autocross event, and she’s champing at the bit to give it a whirl while becoming a fairly early EV adopter in Solo competition.

“I’ve been really, really looking forward to driving the car,” said Griest, who has her own Tesla on order and is awaiting delivery. “They’re stupidly fast. Instant torque. But I’ve never raced one. I’m going to have a blast this week.

“I’m not an insane Tesla fangirl or anything,” she continued, “but I do think Elon Musk has made an electric vehicle accessible to everyone, especially with the price having come down to where it’s at now. But it’s honestly a little terrifying that anyone can go buy a car that is that fast just out of the box for a fairly affordable price.”

Beyond instant grunt, another added benefit to running a Tesla is comfort. Grainger claims he can use the air conditioning all the time without having to worry about overheating the electric motor. And not hauling gas cans around is a plus, too. In Lincoln, there’s a “super charging” station about nine miles away, and the car only uses about 12 percent of its battery during a set of Solo runs. So, guaranteeing you have power for runs at Solo Nats isn’t a real concern.

An added bonus? Grainger’s Tesla has a dashboard touchscreen allowing him to make adjustments to vehicle setup. His car comes with the optional “Track Mode” allowing him to play with the handling balance, stability assist, and monitor the temperature of tires and brakes all from the comfort of the driver’s seat.

Is this the wave of the future? It sure seems like it, and SCCA is truly on the cutting edge of adopting electric vehicles into grassroots motorsport activities. But being on the bleeding edge of technology adoption is tricky, especially when that technology is adapting and changing at blinding speeds. There are safety protocols to develop around the battery units, and insight to be gained as far as competitive fairness. For example, easily downloaded software updates can occur rapidly for Teslas, and those updates can improve performance. So, how do you write an annual ruleset for a vehicle whose dynamics can change multiple times in a year?

It was 2011 when Teslas were first welcomed at SCCA autocross events. Zack Barnes, a five-year member of the SEB, said the Club as a whole has been discussing the issue of EVs for a couple years. They hoped to dedicate more time to the matter in 2020, but the pandemic required a rapid redirection of focus. Now, however, the subject of EVs is again a hot topic.

“Electric vehicles ultimately operate differently than internal combustion engines. The way they deliver power and the way they control power is fantastic,” Barnes noted. “They are going to be the future … and you can’t stop it.”

To show commitment to electric and hybrid vehicles — and the enthusiasts who drive them now and will drive them in the future — SCCA announced a new Electrified Vehicle Advisory Committee (EVAC) earlier this year. The EVAC — a 9-person committee with representatives across all SCCA programs, along with industry experts — is charged with creating unified procedures across SCCA programs for Electrified Vehicles.

Today, Electric Vehicle X is a supplemental Solo class within the SCCA, which means it isn’t included in Solo Nationals competition this year. Instead, you’ll find Teslas in Super Street, A Street Prepared, and Street Modified Ladies. If you want to monitor how the Teslas do at this year’s Tire Rack Solo Nationals Championship, be sure to follow the action at scca.com, and on Facebook and Instagram with @sccaofficial.