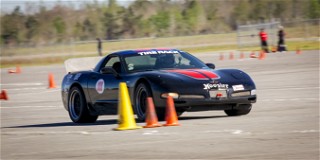 To quote the movie Animal House, “Nothing is over until we decide it is!... And it ain’t over now!” Indeed, just when you thought it was done, SCCA’s Solo Department pulls you back in with the addition of a few bonus Solo events to keep people having #funwithcars into December. The additions include two Tire Rack Championship Tour stops, and a Tire Rack ProSolo event.

Participants are used to events at zMAX running from Thursday to Saturday due to Sunday sound restrictions, but this event will break that mold! This event will follow the series usual schedule of check-in on Friday and competition on Saturday and Sunday. Anytime you can spend a fall weekend in North Carolina just outside Charlotte, in the peak of “leaf season,” is bonus no matter how you slice it!

Registration for this event, held next to Charlotte Motor Speedway, will open shortly. Be sure to check the autocross program announcements at SCCA.com regularly for additional details.

Located about midway between San Antonio and Corpus Christi, Beeville will bee the place for ProSolo in early November. A site familiar to SCCA’s Houston Region, the usual large and rectangular pad is unavailable for competition. So, a new challenge has been created using a runway and access roads for courses and grid -- a condition somewhat similar to the Blytheville, Arkansas site used for Solo competition.

This will be a “trial” event for the Chase Field site being used in this configuration, with the possibility of including it on the 2022 ProSolo schedule. This event is not part of the 2022 ProSolo series and will not count towards 2022 ProSolo Finale Qualification, but will have normal payouts and contingency awards.

There are few perennial events in motorsports with the allure of Red Hill Region’s Axis vs. Allies event which is being hosted over the anniversary of the Pearl Harbor attack for the 34th year. In addition to normal Champ Tour competition, there will be an additional competition for the cars coming from Ally countries and those from Axis powers. Somehow, the Allies manage to win every year.

The exact location is yet to be determined, but likely locales are either South Georgia Motorsports Park in Cecil, or perhaps the Moultrie site while has not been visited by the National Tour since 1996, over 25 years.

As noted, these final three National Solo events will take place after the 2021 Tire Rack Solo Nationals Championship in Lincoln, Nebraska. Class champions and trophy finishers for 2021 will have already been named. Will some of those talented drivers be at these three events? More than likely, which makes each of these an opportunity to test your skills against top performers before the 2022 National Solo season. But for the time being, be sure to follow the upcoming 2021 Tire Rack Solo Nationals by clicking the link below for live timing/scoring and audio coverage from Lincoln Airpark.