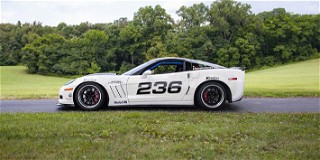 What happens to racecars when their time as racecars is over? It’s a question that prompts some not so great mental images. Many racecars meet grim fates, which is why we celebrate when they get to live on as they were intended. That’s exactly what has happened for one car with some SCCA history.

David and Linda Goebel bought their 2007 Corvette from none other than 15-time SCCA National Champion John Heinricy. Now, they’re donating it to the National Corvette Museum. Originally prepared for Touring 1 by Heinricy and Phoenix Performance, the car will continue it’s story as a demonstration car for Andy Pilgrim around NCM Motorsports Park.

Second on the all-time Runoffs wins list, Heinricy’s name carries a lot of weight around the SCCA paddock, and that wasn’t lost on Pilgrim when he learned about his new ride. “The times that I have taken people around in something that is like a race car, like the car being donated, it is a whole other world. This is going to be a lot of fun and I’m so excited to have it here.”