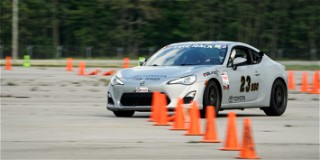 To say there was close competition at this weekend’s Tire Rack Oscoda ProSolo would be an understatement. Of the classes that were represented at Oscoda-Wurtsmith Airport in Michigan during the last “regular season” ProSolo of the year, winners of all but a single competition class were decided by less than one second.

The slightest margin of victory came in Street 3 as Paul Brown, driving a 2012 BMW M3, edged out the 2011 BMW M3 of Jeff Cashmore by only 0.007 second. After trailing Cashmore all weekend, Brown pulled together an incredible performance Sunday to grab the victory.

Another come-from-behind win materialized in the Bump 1 field. John Azevedo, in a 2019 Honda Civic, was in control for most of the competition. But Kent Weaver, driving a 2002 Chevrolet Corvette, mounted a comeback during final runs Sunday to claim victory by 0.344 second over Azevedo. Steve Telehowski, in a 2004 Chevrolet Corvette Z06, claimed third; and Marcus Merideth took fourth with his 2016 Ford Mustang GT350. The fifth and final trophy spot went to Tim Sholar in a 2003 Chevrolet Corvette Z06.

Race Tire 1 shaped up to be a battle of the two-strokes between the 1999 Novakar J9 of Jason Hobbs and the 2014 Honda Tonykart shared by father-sone duo Larry and Jackson MacLeod. Jackson was positioned to challenge for the win but coned away his best run to conclude his runs, securing victory for Hobbs. Only 0.057 second back was Larry who slotted into second while Jackson settled for third, and the 1974 Dulon MP15 driven by John Ryan secured the fourth and final trophy position.

The 2013 Scion FR-S shared by Jimmy Vajdak and Samantha Bray could very well be considered the weekend’s MVP in Oscoda. Vajdak drove the car to victory in Solo Spec Coupe by 0.401 second over runner-up Jeff Jacobs in a 2016 Subaru BRZ. Bray also took the car to victory in Ladies Class 3, achieving a 0.886-second win over second-place finisher Emily Brown in another Scion FR-S.

Ladies Challenge: Samantha Bray, made it to the Ladies Challenge final by beating Langlee King and her 2020 Chevrolet C8 Corvette. The other finalist was L3 runner up Emily Brown, who bested fellow L3 competitor Carla Russo in a semi-final matchup. Brown and Bray went at it with Brown emerging victorious as the Ladies Challenge winner by 0.616 second. King claimed third.

Super Challenge: The Super Challenge final pairing came down to CAM winner Jacob Besemer, in a 2017 Chevrolet Camaro, and Jimmy Vajdak. Both competitors had dispatched of four other drivers on their way to the last matchup, but it was Vajdak who got the all-important fifth win and the Super Challenge victory as Besemer red lit on the final run of the challenge. Jeff Cashmore claimed third by beating Rob Clark and his 2020 Chevrolet C8 Corvette, also from S3.

On to the Finale!

With the 2021 Tire Rack ProSolo “regular” season wrapped up, it’s now on to the 2021 Tire Rack SCCA ProSolo Finale taking place September 3-5 at Lincoln Airpark in Nebraska. The Finale is a winner-takes-all competition where victors are named ProSolo champions for the year.

The Finale will be limited to 250 entrants. The staggered registration process will be as follows:

If spots remain, for members who participated in one or more ProSolo event during the 2021 season.