SportsCar Feature: How Not To Win Solo Nationals 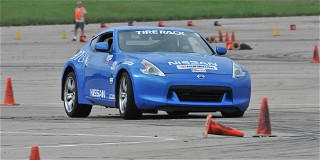 This article first appeared in the August, 2020 edition of SportsCar Magazine. Everyone can read the current and past editions of SportCar digitally here. To become an SCCA member and get SportsCar mailed to your home address monthly in addition to the digital editions, click here. While much of this information was targeted specifically at Road America at the time, much of it can still be applied to the Runoffs this year at Indianapolis Motor Speedway, and for years to come.

Not winning at the Tire Rack Solo National Championships is easy, but not doing it 35 times in a row is an art

How does one avoid winning a Tire Rack Solo National Championship? It turns out that I am a subject matter expert. You might think it would be a challenge to come up short 35 times in a row – and I would say you’re right. The fact is, in addition to aptitude, it also takes creativity to accomplish such a tremendous feat. Consequently, I’m here to reveal every secret I know for repeatedly and unequivocally avoiding obtaining an autocrossing National Championship by as near a margin as possible.

But first some warnings: If you’re what we lovingly call an alien in the autocross world – those who have a penchant for winning despite the odds (I’m looking at you Bryan Heitkotter and Tom O’Gorman) – you’re going to end up in the distinguished list of champions at the back of the rulebook regardless of my tongue-in-cheek-but-all-too-true “How to Not Win” tips. Also, while my tricks have worked for repeatedly putting my name near the top of the Solo National Championship results with nary a win over the course of three and a half decades, I’ve discovered they don’t work for ProSolo. There, I have scored six titles despite my best efforts.

Also, while what I am about to present is by no means a comprehensive list of how I’ve failed from winning at the sport we love, it should prove adequate for most looking to follow in my footsteps. And double also, my writing should not deter you from entering the Solo National Championships – win or lose, SCCA’s National Championship autocross event is the most fun you’ll have autocrossing. Period. It takes place this year on Sept. 7-11 at Lincoln Airpark in Lincoln, Neb., and you need to enter.

But enough chatter – let’s dig into how I have achieved my staggering level of near success.

Make Your Own Bad Luck

It helps to begin your quest with limited driving and car setup talent – but that is far from enough to match my level of success. While you don’t necessarily need bad luck, you need to ensure good luck is not on your side. And, for that, here are my secrets.

Choose a car that’s unusual, this way performance parts are as unavailable as setup advice. If the car also has no available camber adjustment, super soft springs, and a weak limited slip, all the better. Ensuring the car weighs more than anything else in the class is a nice cherry on top.

Picking the wrong tires is also an effective method of staying just shy of the top spot at the Solo Nationals. A corollary to this is to drive on rain tires when it’s too dry for them, or on dry tires when it’s too wet – throwing a Hail Mary in the wrong direction, you could say. A side bonus to this is that tire manufacturer contingency programs are only good if you finish well enough to win them, so this way you get to experience a crushing defeat on multiple levels.

Another approach is to make a plan for driving the Solo course, then fail to execute it properly for the first two runs. If you want to excel at not winning in style, as I am wont to do, the real trick is to then execute your driving plan perfectly on the third and last try – and then realize it was a terrible plan to begin with. That realization must occur on the last run or else you’ll have a chance to correct the error on a later run, and that’s not what we’re here for.

An Alternate Path to Second

Something that works for a lot of competitors looking to walk in my footsteps is to choose an absurdly large and competitive class. Back in the day when the Neons were a who’s who of Solo, go ahead and order a shiny new model and jump in the deep end of the pool – it worked for me.

It is worth pointing out that someone wins regardless of the class size, though, so depth alone is no guarantee of scoring a close loss. So, maybe take a run with the emergency brake partially on just to make sure. It’s a tried and true method.

Picking last year’s good car is also a good approach. This works best if a new car comes out and is classed favorably in the same class. If that new car attracts oodles of talented drivers, all the better.

If you pick a good car but make a major setup mistake, that’s an exceptional way to keep you from the top of the podium. Go with an expensive set of dampers tuned by someone who is supposed to know what they’re doing, then learn way too late that their expertise doesn’t extend to autocross. Oh, but don’t stop there.

To make defeat truly sting, discover the problem with the setup with enough time to apply a fix, but then have an over-dog car get tossed into your class. Torque is overrated, they say. Pro Tip: This one is good enough to keep you out of the trophies, too, not just off the top step.

This next option has to be applied carefully, as one false move can result in a National Championship: Pick a good car, set it up well, and drive it well, but pick an inexpensive class where those with boatloads of talent but limited resources can afford to present a properly prepared car. Apropos of nothing, the list of champions in E Stock is another who’s who of Solo.

So far, you’ve succeeded in avoiding the stigma of a win and obtaining one of those embarrassing “SCCA National Champion” jackets – now let’s keep the streak going.

Hop into a car that’s the polar opposite of what you’ve been driving for the previous decade. No more putting down all the power you have in a small car – let’s go big on power and overall dimensions. A car that hates putting that power down is a <I>big<I> bonus. The fact that it responds completely differently to damping changes than the previous cars can only help.

When R-compounds were tossed and Stock became Street, pick a car that should do well with the 200 UTQG rule. However, make sure you fail to notice a suspension binding issue and you’ve made it past another year.

Yes, there are a lot of approaches to avoiding that first win, but these should help you on your quest. I’ve applied all you’ve read – and more. But if you ever feel down about your streak of near misses, keep in mind that there are a lot of drivers who haven't won, so you’re in great company.

Paul Brown has attended every SCCA Solo National Championships since 1985. In that time, he has competed in nine different classes and scored 29 trophy finishes, none of which have the number “1” on them. He does, however, own a spectacular collection of 11 trophies with the numbers “2” and “3” inscribed on them.<I>