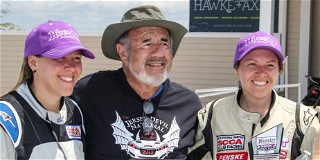 The 2021 Hoosier Racing Tire SCCA Super Tour season wrapped on Sunday from Watkins Glen International. With the season in the books, the national scope of the Summit Racing Road Racing program turns to the SCCA National Championship Runoffs at Indianapolis Motor Speedway, September 25 to October 3.

For All of the Fathers: Happy Father’s Day to all of the dads out there, and those who have stepped in to fill that role both officially and unofficially.

It was obvious at Sunday’s Hoosier Racing Tire SCCA Super Tour that dads, naturally, played a big role in this sport. Some were racing with their kids in tow, some were watching their kids (of all ages) race.

One, Tom Aquilante, saw both of his daughters – Amy and Beth – on the same podium in American Sedan. Ron Whitston saw sons Andrew and Zach share the Formula Vee podium – with Andrew on the top step.

Even though E Production race winner John Hainsworth’s father wasn’t a racer, Hainsworth’s racing career is thanks to the lessons that came from his father in other aspects of his life.

“Dad has pretty much come to every race I’ve ever been to,” Hainsworth said. “Even before racing, I was a bowler in college. He’d come out to every tournament. It was a bonding thing. He liked to see me do well and I liked to make him proud. We had a lot of fun together doing that.”

Spec Racer Test Mule: All season long, a handful of Spec Racer Ford Gen3 drivers have been on the track, but not collecting points or trophies. Why? They’re testing a potential new transmission.

The transmission, mounted in an otherwise identical Spec Racer Ford, is a SADEV six-speed sequential transmission. There are cars spread out through the CSRs across the country, and they’ve put some real-world experience into the test.

This weekend, Shawn Rashid got the chance to run the machine. In just his third career race, he finished second on the track on Saturday and 10th on Sunday.

“Unfortunately, it doesn’t really count for much but it’s a lot of fun,” Rashid said. “This transmission is next level. It brings the racing to a whole other level of fun. It works so well. It’s so great running with all of these other guys and so much fun.”

Running for Office: We’ll forgive anyone who thought Jim Goughary was making a campaign stop after Saturday’s Spec Racer Ford race win. He already has those votes wrapped up.

Following the race, Goughary – a two-time National Champion who calls Jupiter, Florida home but is a New York native – pulled to a stop in the bus stop. Did his car break? Was he out of gas?

“This is my favorite place of all time,” Goughary said. “I have so much family here. My parents are here, cousins, uncles and aunts – there’s 40 of them down by the bus stop, I had to get out of the car and high five each of them.”

We should point out – the stewards actively discourage this type of activity. Goughary finished second on Sunday, behind John Black, who was in from Olympic Valley, California.

Results and More: More information, including results from all weekend long at Watkins Glen, can be found on the Hoosier Racing Tire Watkins Glen Super Tour event page here. Race winner interviews and podium ceremonies are available on the SCCA Road Racing Facebook page in a playlist here.