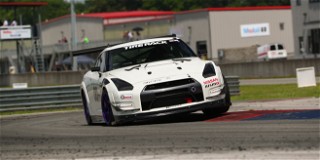 The fourth annual Tire Rack SCCA Time Trials Nationals Powered by Hagerty came to a close Sunday afternoon with the KONI Podium Celebration at NCM Motorsports Park in Bowling Green, Kentucky. The top-three finishers were lauded in each of 18 car classes. But first, let’s look at some of the other awards and honors doled out.

The Hagerty “Keepin’ It Cool” honoree, who receives a YETI Tundra 35 hard cooler, is someone who is simply “cool” throughout the event, a trait that can be demonstrated in a multitude of ways. Peachey received the award because after experiencing troubles with his Chevrolet Corvette early in the event, he wrenched hard on the car, finding a shop several hours away to help him drop the transmission and repair clutch woes. He got back to the track Saturday morning and drove to a first-place finish in the Max 1 class. He also claimed the Grassroots Motorsports Ultimate Innovation Award, which comes with a free entry to the upcoming Grassroots Motorsports Ultimate Track Car Challenge.

This award recognizes the competitor who maximizes resources, does a lot with a little, exemplifies the spirit of the sport, and has a great time doing all of the above. Gu and his 1988 Honda CRX claimed the award this year after an “off” early in the event. But he came back to claim victory in the Tuner 5 class — and drove the car home, which is always an awesome end to any Time Trials weekend.

This is bestowed upon a Time Trials Nationals competitor who exemplifies the spirit of the sport while driving what would be considered a “vintage” vehicle. Perhaps no surprise, Grant received this award for his wonderful 1970 Volvo 144 that was part of the Unlimited 2 field.

This award goes to a car that is home built, is perhaps a little “over the top,” and just plain “rad.” Walker received the award for his turbocharged Mazda Miata adorned with some awesome, self-designed flares.

Awarded to an attendee who shows tremendous enthusiasm and a willingness to help out at Time Trials Nationals. Basically, it’s someone who “gets it” as far as SCCA Time Trials program goals. White spent a chunk of time over four days this year at Time Trials Nationals chipping in and helping others work on their cars in the paddock, including artful use of an angle grinder to free a driver from his car after an arm restraint got lodged against the latch for his 6-point harness.

Those familiar with the autocross community know Wilcox as a very strong competitor. But at this year’s Time Trials Nationals, he arrived in a Toyota Supra to play in the Novice Group and learn a new SCCA activity. For that, he was named the Breakthrough Performer for coming from another Club discipline, doing well right out the box and embracing the culture of the program.

When it comes to Time Trials Nationals, a “champion” is someone who brings people together, promotes the event, and supports the Time Trials community as a whole. Alessandrini received the honor this year in particular for the energy he infused into the Sport 6 class, which is the class in which he also competed.

Driving a Mazda MX-5, Britton was part of the Novice Group at this year’s Time Trials Nationals. However, he drove to a runner-up finish in the Sport 5 class, and was only 3.6 seconds behind the class winner.

It was a warm weekend at NCM in Kentucky, but the wonderful and dedicated workers trackside toughed it out without complaint. They saw each of 200 entrants come by them many, many times over the course of four days. So, it seems only proper they give out an award. The Worker’s Choice award this year goes to the Mazda Miata of Marc Funston. And on behalf of the SCCA and everyone who took part in this year’s Time Trials Nationals, “THANK YOU WORKERS!”

Kyle Carrick, in the Unlimited 1 class, drove his Nissan GT-R around NCM’s Grand Full Course in 2:04.514, which was the fastest lap at this year’s event and reset the overall SCCA Time Trials Nationals track record at the circuit. The previous Time Trials Track record at NCM was 2:05.728, which was also owned by Carrick in a GT-R. And because he was the top finisher at this year’s Tire Rack Time Trials Nationals Powered by Hagerty, he gets free entry to the 2022 Global Time Attack Super Lap Battle at Circuit of the Americas.

Unlimited 1 driver James Rauck set the second-fastest overall lap this year with a 2:05.461 in his Porsche 911 machine.

The third fastest overall lap in 2021 at Time Trials Nationals was a 2:07.615 put down by Unlimited 1 competitor Steve Luca in a Ford Mustang.

Receiving trophies this year were five people who have previously come to Time Trials Nationals at least once before. This set of drivers, however, showed the most personal improvement this year as far as lap times on NCM’s Grand Full Course. Those competitors were Sport 2’s Michael Barnes, who chopped 9.465 seconds off his lap in a Ford Mustang; Max 4’s Josh Owens, who cut 9.252 seconds from his lap using a Mazda Miata; Sport 6’s Keith Wilkening, who also used a Mazda Miata to slice 9.017 seconds off his time; Max 1’s Justin Neal, who dropped his lap time by 7.188 seconds in a Chevrolet Corvette; and Max 3’s Diaz McDaniel, who hustled an Audi RS3 and eliminated 6.329 seconds from his previous best lap.

Below is a list of 2021 Tire Rack Time Trials Nationals Powered by Hagerty class winners. Finishing positions were calculated based on a competitor’s top Time Attack lap on Friday, the best time from TrackSprint 1, the top time from TrackSprint 2, and the best performance from Sunday’s Time Attack. Those four different times were added together and became a driver’s “overall” time. Entries below contain car class, driver name, and car type.

Additionally, several Time Trials Nationals new track records were set on the 3.15-mile, 23-turn Grand Full Course at NCM Motorsports Park. Below is a list containing the car class, driver’s name, car, and the new lap record for the class.