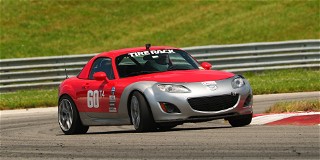 Saturday was the second of three days where good lap times, and good times in general, were important during the 2021 Tire Rack Time Trials Nationals Powered by Hagerty at NCM Motorsports Park in Bowling Green, Kentucky. The day’s focus was on TrackSprint sessions conducted on two distinct, short segments around the winding and undulant NCM circuit.

TrackSprint: One of a Kind

Haven’t before heard of TrackSprint? That’s because it’s a fairly new “challenge” unique to SCCA Time Trials Nationals and Time Trials National Tour events. Indeed, a Club with a history spanning more than three-quarters of a century has somehow developed something entirely different to test drivers.

According to author Jack Baruth in a Hagerty article, TrackSprint equates to a high-speed autocross (without cones) that uses only a portion of a racetrack, and each driver gets only a handful of runs to set a fast time.

“For competitive autocrossers who are just getting their feet wet in time trials, the TrackSprints are an equalizer, a chance to use their adaptability and first-run-fast-run mindset to their advantage,” Baruth wrote. “For experienced time-trialers, the TrackSprint adds challenge and variety to the event.”

Saturday, Time Trials Nationals drivers faced two TrackSprint sessions, one on NCM’s two-mile West Circuit and the other on the one-mile East Circuit. When you take those two layouts and add in NCM’s Grand Full Course used for Time Attack Friday and Sunday at Time Trials Nationals, it’s pretty much like visiting three entirely different racetracks all in the course of one three-day weekend without changing venues. That’s three times the fun without the additional expense.

Mike Breen, a 43-year-old SCCA member from the Tennessee Region, is a Novice Group participant running a black E36 BMW in the Sport 4 class and is making his first appearance at Time Trials Nationals. Late Saturday morning, he got his first-ever shot at a TrackSprint — and was instantly a fan.

“When I pulled up to the cones and saw the timing lights, I flashed back to my autocross days,” Breen said. “When I first took off on that first run, I just thought, ‘this is awesome, this is crazy fun.’ It was so much fun, I couldn’t stop smiling. I didn’t want it to stop.”

Did you know that endurance racing, autocross, RallyCross and Time Trials all have two things in common? Yes, each activity involves cars. But in each type of event it is also possible for drivers to share the same competition vehicle.

There are several cars pulling “double duty” at Time Trials Nationals this year, including the red and silver Tuner 4 Mazda MX-5 of John Li and Matthew Eddy who come from SCCA’s Detroit Region. Buddies for nearly a decade, the two actually drove the small, hardtop, two-seater Mazda seven hours to Bowling Green, Kentucky, with a small trailer hitched to the rear carrying all the accoutrements they’d need for four days at NCM.

Co-driving a vehicle can be a little intense at times when it comes to quickly swapping drivers between run sessions. But the benefits far outweigh that tiny hurdle, according to Eddy.

“You can compare data, lines and all that stuff. That’s the biggest benefit,” Eddy said. “You are literally in the exact same car with the exact same setup…and that has been super helpful to both of us."

Of course, there are other benefits, too, such as splitting various costs and having a friend around who you can joke with throughout an event. But Li said finding that perfect person to share a ride with isn’t as easy as it sounds. Not just any “warm body” will do.

“You have to have chemistry with your co-driver,” Li said. “You don’t want to be with an a**hole, right? You want to be with someone you can hang out with so you can support each other.”

Sharing a small tent positioned in the grass for several nights, a 14-hour roundtrip drive in an MX-5 fitted with a roll cage, four days of car prep and hustling to switch drivers; Li and Eddy had smiles through it all. That, indeed, is a strong friendship based on having fun with cars.

Another Trophy, Another Round of Grilled Meats!

Once again, Time Trials Nationals activities began Saturday morning by handing out an award. This one was the “Take a Load Off Presented by SCCA Gear” Award presented to the participants, whether driver or volunteer, who go above and beyond the call to support the execution of the event. The inaugural winners this year were Brandon Anderson and Heather Ingram who have been helping out primarily in grid, but have also been supporting the staff wherever gaps exist.

And to reward everyone on site Saturday night, another round of grilled meats was doled out during the Time Trials Nationals Social Party presented by Hagerty. All tolled nearly 300 pounds of smoked pork butt, 11 gallons of green beans, 10 gallons of baked beans, 10 pounds of bacon, 7 gallons of corn, and a countless number of burgers, brats, hotdogs, veggie patties and mounds of mac ‘n cheese were consumed over four days at NCM. Those who attend Time Trials Nationals do not go hungry!

The final day of Tire Rack Time Trials Nationals Powered by Hagerty action is tomorrow, Sunday, at NCM Motorsports Park. The event is open to spectators who want to come and be part of the fun. Those who can’t make it out to Bowling Green, Kentucky, can listen online to play-by-play audio from Gregg Ginsberg and Larry McLeod right here, and a couple special guest pop-ins are anticipated. Live timing can also be found at the same weblink above.