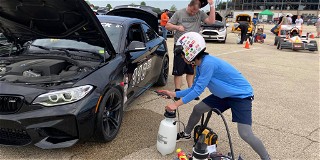 The first Tire Rack SCCA Chicago Championship Tour in recent history this past weekend was a glowing success with warm and beautiful weather all weekend. The event ran flawlessly with competition ending shortly after lunch both days.

B Street led off the first heat with Win-hou “Tony” Chow taking a dominating win 2.65-second class win over co-driver Devin McCuen in their BMW M2. Chow’s two best runs of the weekend were good enough for the overall index win, by a commanding 1.566-second margin. All of this despite drinking a half gallon of milk during course walks on what turned into a very warm Saturday morning.

The final margin in Street Touring Hatch was just 0.749 second with Aaron Buckley, in an Audi TT, taking the win over Alex Piehl, in a Subaru WRX, in the 11-car class. The most notable part of Buckley’s great drive was the choice to run on the relatively new Nankang CR-1 tire while Piehl stuck to the tried and true BFGoodrich. The remainder of the trophies were claimed by Kyle Hemp and Tim Heaton in two more Subaru WRXs.

James Yom struggled all weekend with cones and wasn’t even in the Super Street competition until his last run on Saturday, when he was able to clean it up. Impressively, all three of his Saturday raw times were within 0.207 seconds. Fortunately for Yom, his first run on Sunday morning was clean AND fast as he coned the next two runs, both slower than the first. Rob Clark claimed second in the 10-car class with Robert Pendergest and Dave Becker claiming third and fourth respectively.

The third heat held three large street classes, all bringing close competition. First up was E Street with 18 drivers, two of them National Champions, and two more Nationals podium finishers. Both days, it was Andrew Canak showing how he earned his National Championship by leading the way. Behind him was a hornet’s nest of battles with Mark Groseth emerging in second, just 0.031 second ahead of Riley Heaton. Just another 0.119 second back was Bill Luxon ahead of Eric Peterson and Chuck Mathews to round out the six trophy positions.

Despite a slim 0.358-second lead after day one, it looked like Dan Simms would have to settle for a fifth-place trophy while he stood on cones. On his third run though, Simms not only cleaned up his cones, but found time to retake his lead and take the win by 0.233 second over Jake Glover. William Damhoff claimed the third-place trophy after a nasty spin through the finish on his second day two run. Greg Janulis, Andrew Francis and Brinton Mooberry claimed the remaining trophies in the 18-driver class.

The third heat was also home to the 11-driver G Street class, led by John Azevedo at the end of day one. But third runs brought a big shakeup as Ryan Finch took the lead with his last look at the course. It was short-lived though, as Finch’s co-driver Andrew Ramos took the top spot with the second to last run in the class, claiming victory by just 0.353 second. Joshua Pertzsch claimed the fourth and final trophy. All four trophy winners were behind the wheel of a 2019 Honda Civic Si.