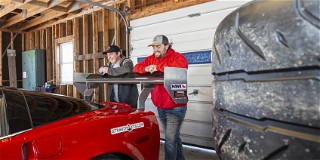 This article first appeared in the May/April, 2021 edition of SportsCar Magazine. Everyone can read the current and past editions of SportCar digitally here. To become an SCCA member and get SportsCar mailed to your home address monthly in addition to the digital editions, click here.

It wasn’t long ago that Justin and Eric Peachey were autocross newbies. A half-decade later, they’re all in, and they’re gunning for the top

“I’ve liked cars for as long as I can remember – I always dreamed of driving cars fast. But I don’t think I ever thought about being a racecar driver.” Those were among the first words spoken to me by Eric Peachey, younger brother to Justin as well as now unabashed autocross addict. In all fairness, though, the story isn’t that straight forward, and a lot of the blame for the Peachey brothers’ newfound passion rightly falls on Justin. But it’s with Eric that this story begins.

The clock on this tale first ticked some six years ago in 2015 as Eric ventured out from his southeastern Pennsylvania home in his modified Scion FR-S. “I met someone at a car meet who invited me out to an autocross,” he recalls. “Autocross was something I’d heard about but didn’t know much about.”

Eric went, and even rode along. Then a week or two later, he explains, he was back with his own car. “I had always liked driving,” he admits, “but it’s not like it was a family thing. [Justin and I] didn’t work on cars growing up.”

That fact mattered little as it didn’t take much for Justin to get hooked as well. “[Eric] did a couple of events and he told me to come on out. I didn’t even have a car at the time – I was driving my pickup truck around,” Justin says. Truth be told, Justin drove a Corvette prior to the pickup, and his future would soon include another Corvette – and another.

“I rode along with Eric at an event, and I thought it was a lot of fun,” Justin explains, adding that the purchase of his second Corvette occurred in time for him to begin autocrossing in early 2016.

“The very first event of the year we both went to an autocross, and Eric co-drove with me. I was decent, I think,” Justin says. Then Eric laughs: “You beat me!”

While Eric was the instigator, it was Justin who dove in hardest. “I was talking to people about how to get faster and, of course, everyone said to buy tires, so I bought a set of [Bridgestone] RE71s and a set of wheels for the next event,” Justin explains. “Right away I was like, this is so much fun – I need to get faster.”

A couple of events later, a harsh reality struck. “I ran against [nine-time Solo National Champion] Sam Strano, and that’s when I realized I had a ways to go,” Justin admits. “I was fairly competitive right away – I mean locally, against people who weren’t Sam Strano. I knew I had potential, but I was just doing it for fun. I didn’t go to National events, I just stuck to my local Region.”

That changed in 2017 when Justin began adventuring beyond his local Susquehanna Region. First came other Regionals, then an event that is part of the Tire Rack National Solo Series. “I went out to Pitt Race for a Match Tour,” he explains, adding that money was an issue, so he slept in his car. Despite that, the weekend concluded on a positive note. “I was something like a tenth of a second out of the trophies,” he remembers. “I felt like I almost had it, but not quite.”

Motorsports, it turns out, is nothing new for Justin. Prior to autocross, motocross kept him busy. But now his attention was focused on autocross, and Eric soon discovered that while he was the first one on the autocross course, Justin was taking the helm.

“Justin went all in,” admits Eric. “I was just having fun – I liked sliding the car around. Justin went all in on trying to be competitive, and he started dragging me out to the other Regions. I didn’t even do that first Match Tour.”

For Justin, the drive to autocross was connected to the desire to be competitive. “At the very first event I thought I’d be pretty good, and then I realized I’m not that good – but I’m close,” he explains. “I thought the next time I go, I’ll beat this guy, and it went from there. Each time I thought I could go a little faster if I just did this or that better, so each time I tried to do something better and try to beat the next fastest car.”

Thanks to a little brotherly pushing, Eric’s cards soon fell. “I guess I was pressured to keep up because I ended up putting a turbo on the FR-S,” he chuckles.

Justin wound up buying another Corvette, this one wearing modifications that put it in CAM-S, with Eric and Justin co-driving the Corvette in order to make National events cost effective.

“We did the Match Tour and a ProSolo, and I wanted to try a Champ Tour,” Justin says of the 2018 season. “There weren’t any CAM-S cars at the Champ Tour, so I co-drove with a friend in A Street. I don’t remember how I did, but there were a lot of National Champions, and that’s when my eyes were really opened to there being a lot of really talented people who are a lot better than I thought I was – it really opened my eyes and made me want to get better.

“Then we were like, let’s go to the Solo National Championships,” Justin says.

A strange turn of events led to the pair attending the 2018 Solo National Championships co-driving different cars, Eric in A Street and Justin in C Prepared. Eric’s trip to Lincoln resulted in a 44th-place finish, while Justin landed in the trophies.

It needn’t be said that 2018 was the year of the flood, with Eric taking the brunt of the storm. “I was something like the fifth car off in the first run group at my first Solo Nationals in the pouring rain on old Rivals in a car I’d only driven once before,” he recalls.

Justin’s heat six experience was largely in the dry. “I was kind of an over-driver, so that [CP] car really matched my style since it was the fastest car I’d driven to that point,” he says. “I was getting better, but I was used to driving on street tires and that car was on slicks, and that was my first time on concrete, so there was way more grip than I was used to. I was trying to wrap my head around how fast this thing was.”

Come day two, Justin hit his stride. “On my third run, I went all out and managed to get a really fast run in, which actually beat that year’s CP National Champion [Tommy Pulliam] on that course. I was the second fastest driver in CP on that course on that day [Michael Maier being the fastest], but I had too much of a gap from the first day, so I ended up in fifth.”

The results from Nationals surprised both, and it fired their passion. Eric’s mindset? “Let’s do as many events as we can,” Eric remembers thinking. So, Justin set to preparing his Corvette. “For 2019, I put Penskes on it, got wider wheels, put a spoiler on the back, took weight out. Over that winter I did a whole bunch of things to make the car more competitive.”

Not being a builder himself, Eric opted to co-drive with his brother while weighing the sale of his FR-S.

The events kept coming and the modifications piled up. For one Solo Championship Tour some seven hours away, the pair worked late building a spoiler, then drove through the night to make their first-heat run group. Come Sunday afternoon, Justin stood atop the CAM-S results.

Entering the 2019 Tire Rack ProSolo Finale in Lincoln, Justin led the CAM-S points, and despite the Corvette not handling correctly, he pulled out the win.

The 2019 Solo National Championships was what became known as “the dust bowl,” and the Corvette was handling strangely. The pair installed a bigger front swaybar, but when that didn’t work, they left the car as is. Turns out, the problem was a binding rear swaybar end link. Nevertheless, the results were positive, with Eric in eighth – one spot out of the CAM-S trophies – and Justin third.

Despite Eric’s massive Solo Nationals improvement year over year, he wasn’t content. “I left a little disappointed with myself,” he admits. “I didn’t feel like I drove my best. I felt like I left a little too much on the table.”

Justin also had regrets. “I was happy with the ProSolo win, but I was really disappointed with Solo Nationals because we tried the bigger front bar and it didn’t work and I was scared to change it back,” he says. “I don’t know what was going through my head at the time.”

And, just their luck, after running a competitive 2020 season filled with top-three results at National Solo events – including Eric’s third-place FP finish at the Toledo Champ Tour, winding up a few seconds back from David Montgomery and Tom O’Gorman – came the cancellation of the 2020 Solo National Championships due to the pandemic.

What have Justin and Eric learned during their total emersion autocross experience over the last six years? “Talk to people,” Eric advises. “Be a sponge. Learn everything you can. Do it as much as you can. That was our big thing – we did every event we could.”

“In the last two years, more often than not on weekends, we’re autocrossing,” Justin agrees. “In 2020, it was almost every weekend. It came down to seat time.”

“That, and not being afraid of the level of competition,” says Eric, with Justin adding, “The faster the people you compete against, the faster you’re going to get because you have to get faster to keep up.”

Eric has also been dialing in his driving by coaching others. In addition, he’s starting to work on his newest car, a Dodge Viper – his FR-S sold after all – although that car won’t be done by this year’s Solo Nationals.

For sure, Eric is now just as hooked on the sport as Justin.

From first autocross to National Championship contenders in a handful of years, the story of the Peachey brothers is astounding. It’s impossible to know where their adventure will lead, but wherever it is, it’ll undoubtedly involve the top of the results sheet.