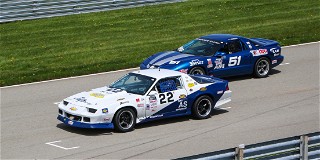 The seventh stop of the Hoosier Racing Tire SCCA Super Tour competed on Sunday at Pittsburgh International Race Complex in Wampum, Pennsylvania under sunny skies and high temperatures approaching 80 degrees after experiencing cold, rain and wind throughout the weekend.

GT-3 Challenge Continues: This weekend marked Rounds Five and Six of the Mazda GT-3 Challenge presented by MPI (or maybe Five and Seven? A doubleheader at Buttonwillow on the West Coast is also taking place this weekend), the season-long championship within a championship for GT-3 cars that culminates at the Runoffs at Indianapolis.

Christopher Howard won on Saturday in a Mazda Miata in his quest to take the season-long prize, a day of coaching from IndyCar and Daytona 24 winner Max Papis. To be clear, though Mazda has sponsored and promoted the championship, it remains open to any GT-3 car – as 2020 champion and Sunday race winner Paul Young can attest from the driver’s seat of his Ford Probe.

“Mazda has put up some prize money at the end of the year,” Young said. “We really appreciate their support, and Hoosiers support, as they’re part of the program as well. It’s really great to have all of this support.”

For The Love: One of the closest races of the weekend was American Sedan, where Danny Richardson earned a hard-earned victory on Sunday over Saturday winner Amy Aquilante. Richardson fought off James Jost early in the race, with Aquilante charging hard at the finish.

How much fun was it? Richardson offered a standing ovation at the podium and got choked up thinking about the weekend.

“I’m hoarse from screaming in the car,” Richardson said. “Jimmy was all over me at the beginning, he actually got by me at one point. Amy had so much more car than me at the end of the race. It took everything I had, my arms hurt, to keep her behind me. It was a long weekend.”

But the race was only the back story. Richardson blew a motor on Friday, and had to have a crew member bring a new one up from near Washington DC. They were at the track on Friday until midnight, but decided to get a couple of hours of sleep and came back to the track about five a.m. to continue working. They missed Saturday’s qualifying, started from the back of the field, and drove Saturday’s race with a bad setup on the car. That effort made Sunday’s race worth it, no matter the outcome.

“First, last, whatever,” Richardson said. “That was one of the best races I’ve ever had.”

Five Stars, Would Recommend: Pitt Race used to be a hidden gem on the Hoosier Racing Tire circuit, but the word is out. The track, the facility and the Region earned rave reviews all weekend from drivers and team members alike.

And competitors came from near and far. Formula F winner Greg Peluso is from less than 15 miles away in Beaver, Pennsylvania, but defending E Production National Champion Jesse Prather towed in tandem with SCCA Vice President, Road Racing Eric Prill from Topeka, Kansas to race at Pitt Race.

“I’m always trying to go to new tracks. Last year Eric Prill was here working and said we need to go to this track, because it looks really cool. And he was right. It was about a 16-hour tow for us, but I love the facility, the track is a lot of fun.”

It was worth it for Prather, who scored two wins and dropped the E Production track record by more than two seconds in the effort.

Straight From The Horse’s Mouth: This weekend’s Hoosier Super Tour, as always, featured some great performances. But you don’t have to take our word for that – our team on the scene caught up with race winners on Saturday and Sunday and you can let them tell you for themselves by clicking here.

More information on the Hoosier Racing Tire SCCA Super Tour from Pittsburgh International Race Complex, including full results, can be found at the event webpage.