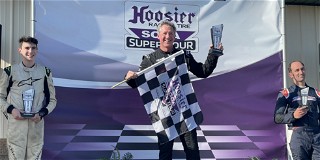 The seventh stop of the Hoosier Racing Tire SCCA Super Tour is this weekend at Pittsburgh International Race Complex in Wampum, Pennsylvania. Saturday featured seven race groups, with qualifying before the lunch break and 25-minute timed races in the afternoon.

What Teething Issues? All new-to-us race cars come with a learning curve, and that becomes even more prominent when the car has been in your garage for less than two weeks. Despite that, Michael Bulzacchelli was able to work around that to score a Formula F win on Saturday in his first appearance at a Hoosier Super Tour.

Bulzachelli had fallen back at the start of the race and turned up the heat following a mid-race full course caution, earning the win.

“This is my first time in this car and my first time at this track,” the race winner said. “This was the first session where I knew where the track went. I still don’t have the braking points down, but I knew where to brake and knew what I had to do after the yellow to make the win.”

Bulzachelli made the move around Greg Peluso down the backstraight, diving to the inside to make the pass stick, an then held a two car-length lead to the checkered flag.

Though he had run a Formula F in Regional races, the adjustment between the old Van Diemen RF84 to the new Piper DF-5 still has significant small differences that take some adjustment. Bulzachelli and his father are the lone crew members at the track, and the younger driver also takes care of most of the heavy lifting. Cousin Doug has helped prep the car at home, but it became clear that the car needs an overnight alignment.

Among the other differences was adjustable roll bar and the transmission. The old car featured the Hewland Mk9, and the upgrade to the Hewland LD200 model just requires a different feel.

“The shifter was unbelievable,” he admitted. “I missed a lot of gears. He got by me down the backstraight and I had to pass him back, and I actually stubbed my thumb trying to shift the car. It’s just completely different.”

Four of the last six class champions were on hand in defending champ Craig Chima, Eric Prill (2019 and 2017), and Kevin Ruck (2015). Add in perennial contenders Charlie Campbell and Mason Workman, and any win would have to be earned.

Prill snagged Saturday’s win in dramatic fashion, starting second but falling behind Chima, Workman and Campbell and running just in front of Ruck early when his transmission wouldn’t stay in gear. Realizing the issue, Prill physically held the shift lever in place and climbed back to the front for the win.

Spec-ial Wins: Typically the Spec classes – Spec Miata and Spec Racer Ford – have wheel-to-wheel finishes measured in tenths or thousands of seconds. Not on Saturday at Pitt Race.

Brian Henderson survived some early-corner challenges to get in front of the field, backing off at the end and maintaining his gap for a 0.7-second win in Spec Miata.

One group later, Jim Goughary – driving a new-to-him car for the first time – ran away from the Spec Racer Ford Gen3 field for a margin of more than three seconds.

More information on the Hoosier Racing Tire SCCA Super Tour from Pittsburgh International Race Complex, including full results, can be found at the event webpage.