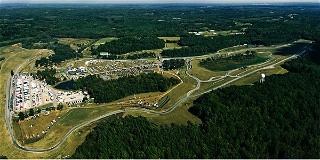 Let’s get this out of the way: if you haven’t been to VIRginia International Raceway in recent years, you’re missing out.

VIR’s 3.27-mile layout comes from the glory era of track layouts in the 1950s that include Road America, Watkins Glen, Mid-Ohio, Laguna Seca and more – designs that came from racers on bulldozers, not computers and lawyers.

Famously, the track closed down in October of 1974 and became a farm until investors Connie Nyholm and Harvey Siegel resurrected the track in 1998. And when we say “became a farm,” we don’t mean goats were eating the grass on the edge of the racetrack. The place was overgrown and a working farm for 25 years.

Somehow, someway, the original layout was still loosely there. A new strip of asphalt retraced all 18 corners, and the track reopened.

But a return to glory isn’t an instantaneous process. It requires commitment and ongoing work. Nyholm, now the track’s owner and CEO, and COO and President Kerrigan Smith make sure that happens.

“You’re only as good as your last day of work,” Smith is fond of saying, and his staff takes that to heart.

The changes to the facility recently are numerous. The facilty includes “The Lodge,” a three-story hotel on site that overlooks Turn Five. The Lodge was built in 2003; The Villas – privately owned townhomes overlooking the Esses – went in beginning in 2007 (not ideal timing). The track was repaved and slightly widened in 2016, and in the past five years a number of other noticeable changes – more paved paddock, well maintained access roads, a skid pad – have gone in.

And the feel has changed. Prior to Smith’s promotion to President in 2018, the track operations and the “resort” side of the business – the housing, the food, etc. – were operating almost as separate entities. Now, that focus – the policies, the people, the experience – fall under one umbrella.

“We’re not trying to take anything away from town or compete with anything in town, we’re just trying to figure out how do we take care of the demand we have right now,” Smith said.

And right now the largest demand is for Villas. Rarely does a Villa become available for sale, and it rarely stays on the market for longer than a day – which speaks to the popularity of the race track.

So whether it’s a second home or just a visit, four walls and a jacuzzi tub or a campsite, VIR is a getaway for a number of enthusiasts – both on rental weekends like this weekend’s Hoosier Super Tour and spectator events like the IMSA weekend.

“We want people to be able to come here and escape,” Smith said “That’s what’s so nice. There’s no mission here. You’re coming here to be at a racetrack, to be at VIR. Especially during COVID, we’ve seen camping go through the roof. People want to stay in their spot, in their own stuff.”

And not all of those changes are noticeable. VIR incorporated Taylor Hospitality as a partner to run the Tavern business and Pagoda concession stand beginning formally in 2020.

“If it’s not broken, we don’t want to be fix it, but what’s VIR in the next 20 years,” Smith says. “As Connie always gracefully says, we’re just the keepers of VIR right now. I don’t want to be the guy that screws something up. Every time we make a change… you have to be very careful with VIR because people treat it as their first-born child. I’ve been sitting here thinking about a change for six months, going through iterations and talking to people and I’ve had piece with it, it’s the right thing for VIR. But when you do it, someone else hasn’t had time to process it, says ‘how can you do that!’

But more often than not, Smith’s team is right. And that’s what makes the future of VIR so bright.

With many of the major facilities up and functioning, the next step is a combination of spectator viewing improvement and infrastructure upgrades that, between both sets, will touch nearly every person who comes through the gates.

“We’ve run guardrail on the back straightaway,” Smith said. “The next step is to get some catch fence and some spectator fence there. We want to start opening that area up so that people can have access to it. We’re laying out what we think we need to be doing in the next five years. A lot of the other stuff you’re not going to see. It’s fiber, it’s upgrading our firetrucks and ambulances. We need to upgrade our radios. Spectators won’t notice it, but it’s critical to our operation. But we’re trying to open more fan areas. Can we open up the area between Turn one and five. How do you make more of this property available?

“We tried to make a few changes. VIR was a track that you could never see the start or finish of the race as a fan, so by moving it everybody up on spectator hill, especially if we open up that area between one and five, they’re going to be able to see all the action. If we can open up the back straightaway, you’re going to be able to see all the fantastic passes that happen. It’s fun to think along those lines.”

Smith and the team mean it, however, when they say they’re just the caretakers of the track. And that has served all of us well. That comes directly from the top – and was part of the plan for Connie Nyholm all along.

“Too many people have ego, and would look at VIR and say ‘I know this would be better.’ They didn’t do that, and that’s why we are where we are today.”

The Hoosier Racing Tire SCCA Super Tour is at VIR this weekend. For more information on the event, visit the event page here.