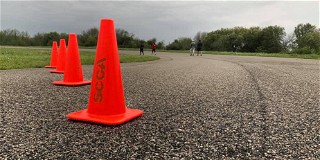 GrandSport Speedway, located about 50 minutes southeast of downtown Houston in Hitchcock, Texas, was where 174 Sports Car Club of America autocrossers came to play this past weekend, March 26-28, at the Tire Rack Texas Championship Tour, the second Champ Tour event of the year. Temperatures topped out in the upper 70s Saturday and lower 80s Sunday with overcast skies both days. Rain was a threat, but held off during competition runs.

With 13 entries, D Street (DS) had a solid showing this weekend. Javier Reynoso, driving a Honda Civic Type R, topped that field both days and took victory by 0.315 second over the Honda Civic Type R of Brandon Dan. Street Touring Roadster (STR) also had a baker’s dozen as far as entries. Daniel McCelvey and his Mazda MX-5 Miata put together two strong days with runs in the 65-second range to take the victory in STR by 1.553 seconds over the Mazda MX-5 Miata of Ricky Crow. McCelvey’s performance also earned him a runner-up finish in the weekend’s PAX results. The overall PAX win went to Street Touring Sport’s David Whitener in a Mazda Miata.

C Street (CS) also had a nice field with 10 entries. Landon Thompson and his Mazda Miata led after the first day of competition, but Vivek Goel had the fastest time Sunday in a Mazda MX-5 Miata. However, Goel’s effort fell short and Thompson took the win by 0.456 second.

Classic American Muscle (CAM) drivers where well-represented in Texas this weekend, too, with nearly 20 entries spread across three classes. Jacob Crow was a standout there, driving a Ford Mustang GT, claiming the CAM-C class victory and fifth in the PAX standings by completion of competition.

A little drama found its way into the event during Super Street (SS) runs. The Acura NSX of Eric Sutton looked to be in position for a win. However, a “missed cone call” protest bumped him down a position. Erik Strelnieks, also in an Acura NSX, ended up with SS victory by 0.707 second.

The Tire Rack Solo Tour continues next month with a swing out west for the April 9-11 Tire Rack Las Vegas Championship Tour event at Las Vegas Motor Speedway in Nevada. Registration is open for that event with a limited number of slots still available. Act now to secure entry before the 200-person cap is reached!