In Defense of a National Championship 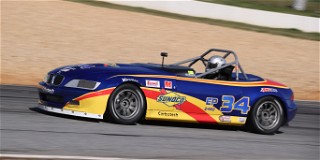 It’s still very early in the 2021 Summit Racing Equipment SCCA Road Racing season, but it’s never too early to start thinking about the National Championship Runoffs, which make a return visit to the road course at Indianapolis Motor Speedway this year. In preparation for that end-of-year extravaganza, a handful of defending champions are at Michelin Raceway Road Atlanta this weekend for the Hoosier Racing Tire SCCA Super Tour’s fourth event on the calendar. And while those drivers all have one thing in common, and that is being reigning champions, they also have unique challenges and perspectives on defending their class titles.

Fresh Perspective from a First-Timer
Last year at Road America, 17-year-old Riley Salyer claimed his first Runoffs championship. The B-Spec class is where Salyer competes, and this weekend at Michelin Raceway Road Atlanta he is sorting out the No. 22 Chevrolet Sonic to see if it might be a worthy steed for his title defense. A fairly reserved individual, Salyer’s take on winning his first championship is pretty straightforward.

“It still feels good to know that I won, but I just treat it like a normal race,” Salyer said. “I just try to go out and win as much as possible. I pretty much try to win every race.”

A couple previous B-Spec national champions are on track at Michelin Raceway Road Atlanta, so Salyer will have his work cut out for him this weekend. But as far as having a target on his back, Salyer’s philosophy was pure and simple.

“I feel like some of them really want to beat me, but everyone has a shot,” Salyer said. “I don’t want to lose, but you’ve got to lose sometimes.”

Second Chances
Anyone who follows Spec Miata (SM) in SCCA Road Racing knows it’s a very, very competitive class. On any given weekend, any number of competitors are in the hunt for victory, and the same is true at the Runoffs. Since making its first Runoffs appearance in 2006, a title defense in SM has only occurred once, and it was Jim Drago who achieved that feat.

Preston Pardus, driving the No. 12 Mazda Miata this weekend at Michelin Raceway Road Atlanta during the Hoosier Super Tour, is the reigning champion is SM. He claimed that championship once before back in 2017 at Indianapolis Motor Speedway, but was unable to repeat. This year, he gets a second chance at a title defense.

“You’re only as good as your last race, I think,” Pardus said. “You’ve got to live in the present, and we’ve been pretty competitive this year out of the gate at Sebring and Homestead.”

Pardus works closely with Drago, perhaps creating some sort of advantage. But Pardus also has to race against Drago, which won’t make things easy as far as defending a championship. Plus, part of Pardus’ focus in 2021 is on competing in the NASCAR Xfinity Series. Will the pro diversion be a drawback to claiming back-to-back SM championships? That answer will reveal itself later this year at Indianapolis Motor Speedway.

Twice the Challenge
Mark Boden is a four-time Runoffs winner, but has never been able to defend that championship one year to the next. He came close back in 2010 at Road America, but was hampered by traffic while leading GT-2 and ultimately finished behind eventual winner Jim Goughary.

“He deserved it,” Boden said of Goughary. “If I couldn’t defend it, at least I have respect for the guy who won.”

In 2021, Boden is in a unique position as the only competitor attempting to defend two national championships, one in the Touring 1 (T1) class and the other in Touring 2 (T2). And he’s present at this weekend’s Hoosier Super Tour in T1 driving the No. 46 BMW M3, and in T2 with the No. 46 BMW M2 racecar. But before any defensive effort began, there was time to rejoice.

“It’s such a highlight of your year. It’s awesome. You’re on cloud nine, and it lasts a while,” Boden said about winning at the Runoffs. “But then you got to start off fresh. You don’t go into the next year thinking you’re any better than you really are. You start the work all over again. You can very easily rest on your laurels. But you’ve got to set that aside and say, ‘let’s start working really hard again.’”

“This year in T2 we’re developing a new car,” Boden continued. “So, I’ve got a ton of work to do in getting it competitive and me competitive in it, and start figuring out what it will take to be out front at the Runoffs in T2.”

A solid competitor at any SCCA Road Racing event, Boden is no stranger to having a target on his back and knowing that fellow drivers see him as the one to beat. But that pressure serves as a driving force for success, a reminder of the work that needs to be done.

“The work is what makes this fun. It makes it worthwhile,” Boden said of motorsports. “If it was easy … I don’t think it would mean very much to win.

“I know that there’s multiple guys working all year to win that championship,” Boden said in conclusion. “It’s going to be tough. Indy is a place where everybody wants to win. I know there are going to be a lot of guys there that have done the work. And anybody that has done the work will have a chance.”

Successful Title Defenses
Two defending Runoffs national champions, with every intent on repeating in 2021, are racing this weekend at the Hoosier Super Tour event, and they have both actually managed to successfully defend previous championships. First there is American Sedan (AS) driver Gregory Eaton, in the No. 21 Ford Mustang, and the other is Jesse Prather, driving the No. 34 Jesse Prather BMW Z3 in E Production.

Eaton, who is actually shooting for a championship threepeat this year, is extremely pragmatic when it comes to his line of thought and preparation pertaining to title defense.

“We have a good time that night after it’s all over. It’s pretty special right then, especially when you’re with your family and friends,” Easton said about the hours that follow a Runoffs win. “But if you really want to run up front, I don’t think you should dwell on that win too long or it will slip away from you if you think about wins like that all the time. For me, I need something to chase; something to drive me. Dreaming about crossing the finish line last year really doesn’t do it for me. I need to feel like I’m behind the eight-ball and struggling to continue to work hard. For me, I just can’t stay focused unless I have something I’m fighting for or digging myself out of a hole. I need that kind of adversity to get the best out of myself.”

Not surprising, Prather’s thoughts on the “buzz” of a Runoffs win have evolved over time. The first national championship is a rush. From there, well …

“Personally, I find that the longer you race, the more calm you become after a big win,” Prather said. ““These days, I’m over that ‘high’ fairly quickly and I’m ready to start to prepare the car for the next season fairly quickly. I move on about two weeks after I’m back from the Runoffs. I’m ready to get the car up in the air, start tearing it down, and start getting prepared for the next season pretty quickly.”

As far as having a target on his back that other AS racers aim for, Eaton certainly understands that practice -- especially because that is what he has used before to get motivated.

“When I was coming up, I put people on my list and said, ‘yeah, I need to be like that,’” he admits.

Prather agrees that being a target can be a good thing, stating, “I don’t look at that as a bad thing. It’s a little bit of an intimidation factor on the rest of the field. So, it doesn’t bother me at all as a defending national champion.”

Furthermore, Prather said there is an intangible gift national champions gain after their first victory. That is confidence, and that can produce tangible results as time goes by.

When it comes to competitors defending a national championship for the first time, Eaton had some advice.

“Don’t listen to anybody. Listen to yourself,” he said. “You are the one who knows your strengths and weaknesses. You know what you have to work on. Be honest with yourself on what you need to do.

“Guys that have won the Runoffs, then not won it and then came back, I think those guys have already been hurt, emotionally, after winning it and then not winning it,” Eaton continued. “Kudos to them for getting down to it and fighting back. I think that is true strength.”

And what advice does Prather have for first-time defenders?

“The suggestion I give to anybody who is coming off a big win or a championship is to keep doing the same,” he said. “A lot of guys will change things up and start thinking outside of the box and really doing some strange things to their cars. What you really need to be doing is just capitalizing on what got you that first win to begin with. Just make things slightly better. Until it’s proven that somebody can beat you, don’t worry about it. Capitalize on what you did and don’t change the whole program. Just make it a little bit better.

“Ride the horse that got you there,” Prather continued. “If you are going to make changes to your car, do them during the season, do your testing there. Never, ever, ever show up to the Runoffs with a change to your car. I don’t care if it’s tires, brakes, springs or anything. It’s never worth it, and it never works out. Ride the horse that got you to the dance. That’s the key to doing well at the Runoffs.”

Oh, and one more tip for anyone who participates at the Runoffs in any given year.

“A lot of guys after the Runoffs like to leave their cars sitting months on end. Then when the new year comes around, they get in panic mode,” Prather noted. “What I like to do is get the car jacked up and do one thing every day. If it’s take off a lug nut, that’s great. The next day, pull all your tires off. The next day, clean your tires. The next day, warm up the car and change the oil. If you do it this way, you never have a panic situation when it comes to being prepared for the next race season.”

An Addendum
There was a sixth driver at this weekend’s Hoosier Super Tour in Atlanta that could, technically, repeat as a national champion. In fact, he could threepeat. That is Clint McMahan, who was in the No. 46 McRee 001 Formula 500 (F5) car. However, McMahan does not intend to compete at the 2021 Runoffs, choosing instead to take a step back and serve as a mentor for other F5 racers. We’ll just have to wait and see if that is truly the case, however, because you never know how hard the racing bug will bite when Indianapolis Motor Speedway is involved.