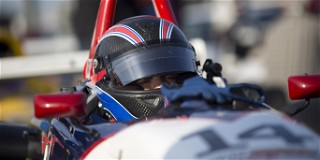 This article first appeared in the May, 2020 edition of SportsCar Magazine. Everyone can read the current and past editions of SportCar digitally here. To become an SCCA member and get SportsCar mailed to your home address monthly in addition to the digital editions, click here.

Inside a racecar is the best place in the world, but it can also be scary. Racing coach Jim Kearney explains how to stop pre-race jitters from ruining your day

It gets very quiet on the grid. Your body may be strapped in the racecar ready to race, but your brain may be screaming “jail break!” After all, following the rush to get the racecar prepped, you now find yourself on grid, alone with your thoughts. The question is: Are those thoughts friend or foe?

From where to paddock to the Rubik’s Cube of racecar setup choices to pre-race strategy, hundreds – if not thousands – of decisions are made each race weekend. Many of those multitudinous decisions go unnoticed, but others may bubble into your subconscious, leaving worrisome, doubtful thoughts just waiting to creep from your brain at the least opportune time.

You see, racers are often more aware of the condition of their racecar than their own mental state. They obsess about tire pressures but fail to ask: Is my brain in the right gear? Many just hop in, strap down, and hope for the best – but that shouldn’t be the case. So, before the next race weekend arrives, let’s work on those thoughts.

“What did I forget?"

You can’t feel like a superhero if your cape is in the trailer. You need an established process to complete your car prep without fail, allowing you to flip the switch from mechanic to driver. The mechanic looks for what can go wrong, and then prevents it. A driver needs to think that nothing can go wrong. If you are sitting on the grid, worried to death that you forgot to torque the wheels, you’re not going to exude confidence.

The fix: The list of things to be forgotten is lengthy. A checklist lets you do the work without worry. You want a strong sense of being ready, not a question mark.

“I’m just not that good”

Many drivers harbor the notion that they are permanently doomed to last place. Instead of fretting that others are naturals, why not think about how you can improve? The evidence is overwhelming that successful performers aren’t naturals; they work hard at their craft. Also, the more frequently they put in quality time, the better they get. Lamenting that you didn’t win some genetic lottery is the ultimate excuse.

The fix: Ask yourself, where are you weak and what is your plan to do something about that? Like virtually every other task known to humankind, driving a racecar is a learned activity. Set achievable goals for each race weekend and concentrate on those.

Everybody has nerves. Some drivers are as cool as cucumbers, others are hot tamales, but most are in between. Getting pumped up just before a race is rarely necessary or helpful.

I follow Jackie Stewart’s model, letting nervous energy out like a deflating balloon. I withdrew from interactions and aimed for a quiet, emotional flat line. It is about discovering what works best for you.

The fix: Nerves should be viewed as allies, not enemies. They are alerting you to be on your toes. Pay attention, but don’t freak out. It will feel better once the car rolls off the grid.

“Is the problem me or the car?”

Drivers often make multiple racecar setup changes to make the car better. Sadly, this creates uncertainty, and uncertainty breeds tenuous inputs and takes you farther afield. If you made multiple changes, there is no way you can ascertain what did or didn’t work, and now you’re even less likely to be able to concentrate on the race at hand.

The fix: Go back to your most basic racecar setup sheet and try things one at a time. It takes longer, but then you know what works. Confusion is kryptonite to confidence.

This approach works well in the movies, but in the real world, anger is a drag chute handicapping your performance. For short bursts of time there may be some gains as you push past prior levels of commitment but driving while enraged results in serious inconsistencies and has a major adverse impact on your judgment.

The fix: You want a sense of firm resolve behind the wheel, not a red mist of anger and desire. It sounds simple, but cool down, then race.

Pay special attention to this one. This is more of a mental idiot light than an anxiety balloon, but it’s not to be discounted. Racers are often unrealistic about how much they can accomplish in any given timeframe. They believe they can tow 10 hours and be fresh in the morning. You need to acknowledge your condition and get some rest.

Admittedly, in the throes of the race weekend, this can be a very tall order, but just know this: some of my biggest wrecks occurred when I was exhausted. I stubbornly refused to recognize the problem.

The fix: Persistence is grand, but only up to a point, and “I’ll be fine when I’m in the car,” only works to a degree. Arriving exhausted is simply no good, so plan ahead.

It could be any piece of the racing puzzle: the starts, braking, high-speed turns, technical corners, strategy, and so on. Condemning yourself to some supposed limitation doesn’t help the learning process, it just gives you a ready-made cop-out. So, do something about it.

The fix: Make a plan to address your shortcomings one at a time and evaluate your progress. Nobody magically gets better just because they are dissatisfied.

Some people have a laser focus, others don’t. Everybody loses focus on occasion; the question is how quickly you regain it.

The fix: A good tool is a trigger word or phrase, such as, “back to business,” works wonders. If you feel your focus waning mid-session, quickly utter or think the trigger words. Often, the fact that you have a solution up your sleeve prevents the issues from even arising.

“I’m going to be perfect this time.”

The search for perfection is its own punishment. Every fast lap has a few sloppy moments, and every good race has some messy bits. Shooting for new personal bests inevitably brings you to moments of great pucker, and those may require a deft catch. Ultimately, having perfection as a goal is a recipe for frustration.

The fix: Focus on improving specific skills, and don’t worry about perfection.

“Everyone is outspending me.”

Exactly how does that thought aid in your attempts to improve? Getting fixated on the competition’s race equipment is shooting yourself in the foot. Perhaps they do have more power, a superior aero package, and their car handles better than yours. But tell me, how does fixating on any of that make you faster?

The fix: Your focus should be on driving better and improving your car. Work on you.

“I never catch a break.”

Shed this toxic notion from your head right now, then consider this: You are a racecar driver! Most of the world would love to be in your position. In fact, a younger version of yourself would be so jealous of you as you sit on the grid waiting to hit the racetrack.

The fix: Win or lose, enjoy the race weekend – you have the best hobby in the world! Also remember what Pratt & Miller’s Steve Cole says: “The harder I work, the luckier I get.”

If the car is so unstable that you can’t handle it, you must park it. Driving scared in traffic is a non-starter. Your inputs will be stiff and awkward, adding to the bad behavior of a car.

The fix: Your racecar must be sufficiently compliant to allow you to survive the moments of panic that are bound to arise on track. If the car feels dangerous, don’t go out until it’s fixed. Do not ignore this blinking red light.

Racing is like life, so sometimes you need to make adjustments. Successful athletes know this, and they have developed routines that enable them to stay in charge of their thoughts and moods. For every negative vibe you catch yourself thinking, pave over it with a positive one. Over time, it will become a constructive habit.

Whatever your level of motorsports, you can change your mindset as you would a shock setting, but you first need to be aware of the need for change. Step one is to recognize the bad thought, and step two is to pitch that thought overboard and replace it with a helpful one. Then just like a racecar setup sheet, keep track of what works for you. Before long, you’ll stop worrying, see on-track improvements, and the next thing you know you’ll be enjoying every moment of your race weekends – just like you should.

A note from the author:

I clearly remember what it feels like to do poorly and not know why. I was overwhelmed, confused, and frustrated. This memory now serves me well as a driver coach. Racecars are complicated, but driving them a little better is not. I began coaching in 2010 and my drivers have been on the Runoffs podium 15 times, including six gold medals (two each in FV, FF, FC, FE, HP), two silver (both in FE) and six bronze (four each in FV, FC, P1, FM). I also coached the FRP F2000 champion twice. Ross Bentley also recently noted in his Speed Secrets Weekly that the SCCA Runoffs may be the one of the biggest mental challenges in sport. Ross said: “Guess who I’d get to coach me if I was racing in the Runoffs? Why? Because Jim tunes the helmet.” Check out kearneykdd.com for more information.