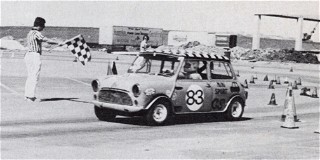 This article first appeared in the November/December, 2020 edition of SportsCar Magazine. Everyone can read the current and past editions of SportCar digitally here. To become an SCCA member and get SportsCar mailed to your home address monthly in addition to the digital editions, click here.

With no 2020 Tire Rack Solo National Championships to report on, let’s look back at the event’s humble beginnings

2020 marks the first time since 1972 there was no Solo National Championships. The announcement of the cancellation of this year’s running of the winner-take-all autocross event came on Aug. 5 and was both a disappointment and a relief. But for me, the event’s cancellation really hit home the Friday we should have been on site in Lincoln, Neb., setting up our paddock, and then mid-week when we would have been competing or working. Weather reports indicate this might have been a really interesting year, with temperatures ranging from the 40s to the 90s. But we’ll never know what would have happened. Meanwhile, this should be a distant memory come September 2021 as we return to near-capacity attendance at Lincoln Airpark for the continuation of the iconic Tire Rack Solo National Championships.

Meanwhile, this article appears in the championship edition of SportsCar, which features the winner-take-all events for everything except for the Solo National Championships. Not having any championship results to discuss, this seems like a great opportunity for some random thoughts about the Solo Nationals – so let’s dig in.

My first year competing at the Solo National Championships was 1985, which was also the first year of having a Chiefs Team consisting of members spanning the country rather than a host Region heading up the event. Given the size and complexity of the event, there really are not a lot of Regions that could have managed the event once it broke the 600-entry barrier. It’s interesting to recall how challenging we found it to run that many entries through a couple of courses in four days. 2018, it should be noted, wasn’t the only time a day’s competition could not be completed on schedule and had to wait for daylight the following day.

The first Solo National Championships took place in 1973. That year, 224 entries were run over a single weekend. That format continued through 1982, where organizers managed to handle 577 entries. As the event transitioned into a four-day event, it would be more than 20 years before the Club would run that many through their competition runs in a two-day span.

I remember competing in an autocross in Roswell where the timing system failed and we were forced to utilize stopwatches. The first Solo National Championships took that a step further, with the start and finish being so far apart that the stopwatch operator received the start signal verbally over a radio. There are questions about the validity of the current claim of resolution to the thousandth of a second with existing timing systems, so consider this: There was a class decided by a tenth of a second with that original remote manual system.

Way back in the day, a cone counted if it was just wiggled; not surprisingly, that resulted in disagreements. Later, the rule was tweaked to the cone having to reside completely inside a two-inch box, which was then altered to “still touching any part of the two-inch box” when it was codified into the rulebook. That finally turned into the current no-two-inch border requirement of “still touching any part of the box drawn around the cone.”

We’ve come a long way over the decades, and the Solo National Championships has become an event that no one wants to miss. In fact, it took a pandemic to stop many of us from showing up at Lincoln Airpark in early September this year. And, now that we’ve all been forced to miss one, it’ll be fantastic to see everyone again come the 2021 running of the Tire Rack Solo National Championships.

Words by Paul Brown
Image from the SportsCar Archives