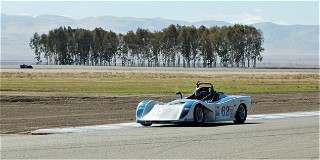 Formula F Comeback: Denny Renfrow, driving a Piper/Honda DL7, jumped to an early lead in Formula F Saturday in the first race session of the day. Charles Horn, driving the No. 54 Porter Racing/Hybels Ent./Margraf Racing Swift/Honda DB6, started third and remained there for the opening laps.

Four laps in, Horn moved around Bill Kephart’s Vestal Crane 02 15AB for second place. Then, he slowly reeled in Renfrow and passed for the lead two laps from the finish. On the last lap, Renfrow made a good run down the front straight, looking to make a move to the inside. But Horn positioned his car down low and staved off the attack to take the win.

Easy-peasy, right? Not actually. The wind Saturday picked up substantially from Friday, and dust blowing across the track made things real slick -- a development noted by many racers throughout the day’s competition. And to add to that, Horn had been wrenching hard on his car because of camber issues on the left side. According to him, you need the left side of your car to be hooked in at Buttonwillow if you want to be successful.

“I had a really good start and was just kind of biding my time until I got an opportunity,” Horn said. “The track was really, really dirty, so it was hard to keep your car on line. People were making little mistakes, so I just tried not to make any mistakes until I was finally able to catch Denny.

“With the wind and the dirt, it was all you could do to stay on track,” Horn continued. “A couple times in Riverside (corner) I got completely sideways. I think that was because of the wind. It actually scares you and makes you a little timid through there the next time.”

Nine Seconds is A Lot: TJ Acker, in the No. 62 MBI Racing/Cindescency SCCA Enterprises Spec Racer Ford Gen3 car, took the win Saturday. The margin of victory was a couple ticks over nine seconds. That is a pretty amazing gap in any SRF3 race, which are frequently decided by fractions of a second. It’s even more impressive when you consider former Spec Racer Ford Runoffs National Champions Mike Miserendino, Todd Harris and John Black were trying to chase him down.

At the finish, Miserendino ran second, and Harris third. But there’s a hitch to that rundown. Throughout the 2021 season, SCCA Enterprises -- which builds Spec Racer Ford Gen3 cars -- will be testing and collecting data on the developmental of a SADEV sequential transmission for SRF3 cars. There will ultimately be about 25 preproduction development transmissions in use across the country this year, and Harris happened to be running one Saturday at Buttonwillow.

Drivers using the developmental transmission are excluded from setting new official lap records at races. Those drivers will still earn participation and a race finish credit toward Runoffs qualification, unless other  penalties are assessed, or the driver did not complete the required distance to earn a race finish. But drivers using these transmissions will be moved to the end of the field, meaning they can’t claim a podium finish.

So, the final spot on the SRF3 podium Saturday actually went to Umberto Milletti.

Pick Yourself Up, Dust Yourself Off: Jim Devenport grabbed victory in Prototype 1 driving the No. 28 Cranbrook Group Inc. Norma M20FC car. The second-place finisher was Johnnie Crean. Considering Crean’s last 24 hours, the fact he even made the starting grid is astounding.

The No. 3 Dauntless Stohr Prototype 1 car of Crean came back to the paddock late Friday afternoon on a hook. It looked mangled, dusty and unlikely to make the grid for Saturday’s race.

“The upper element of the wing fell off on the back straight,“ an uninjured Crean said from his motorhome. “So, when I turned in there to Riverside (corner) I was going 149.6 mph. When I turned, the front turned and the back just kept going. I did a 720 spin in the dust.

“It blew the cowling all off. It blew the center section off. The only thing left on the car were the fenders,” Crean continued. “The guys at ONE Motorsports were incredible to get the car back together. They started working on the car as soon as it came back in yesterday. They were here late last night, and got back early today to put the car back together. They taped together the center section. The floor was broken on one side, so they put plywood underneath the bottom to hold the floor up.”

Obviously, the hard work paid off -- and Crean was extremely grateful for the tremendous effort.

More information on the Hoosier Racing Tire Super Tour from Buttonwillow Raceway Park, including full results, can be found at the event webpage.