Spectrum of SCCA Road Racing on Display at Buttonwillow 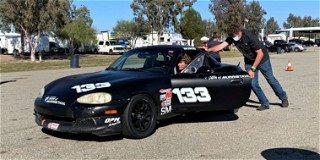 A wide array of cars, spread across 28 different competition classes, are on exhibit this weekend at Buttonwillow Raceway Park in California during the Hoosier Racing Tire SCCA Super Tour’s third event of the season, hosted by Cal Club. But this story is about the spectrum of “age” and experience on display, too.

At one side of the spectrum is Dave Lemon, 72, who is back racing with Sports Car Club of America after a decade’s absence. Dave first got his competition license back in 1971 at California’s long-gone Riverside International Raceway. Sitting at the other side of the spectrum is Boris Said Jr., 17, who only recently received his competition license and is competing in his first-ever Hoosier Super Tour event -- and only his second-ever SCCA race weekend.

Dave arrived at Buttonwillow this weekend with his No. 99 Mazdatrix.com Mazda RX-7 outfitted for E Production competition. But he also arrived with 50 years of auto racing experience. He made his first appearance at the National Championship Runoffs back in 1976, and finished as high as fifth over seven visits to that event. During his half-century of motorsport fun, Dave has competed at IMSA events, done some Trans Am racing, played around with time trials and track days, and even won once at Daytona in the early ‘80s.

“January of 2011 was the last SCCA race I did,” Dave recalled. “I kind of quit because I was frustrated. I just got tired of it. I got tired of traveling, so I quit and sold my car.”

You can’t blame Dave for running a little low on enthusiasm after so many years. Racing filled his weekends, and his work week was focused on running Mazdatrix.com for more than 30 years, which is his company that ships performance parts around the globe. But a thirst for motorsports rarely totally leaves anyone, and that passion has sparked again for the silver-haired competitor.

“I never got rid of all my stuff. I still had my truck and trailer, all the gauges and my tools,” Dave says. Plus, he still had the Mazda RX-7 he’s running at Buttonwillow this weekend. So, off he went to have fun and play with the SCCA again.

And playing with SCCA is something Boris Said Jr. is just starting to explore. This weekend at Buttonwillow, he’s piloting the No. 133 Mazda Miata around the 3.02-mile circuit in Spec Miata. While new to SCCA competition, the high school junior is no stranger to being at race circuits. The son of accomplished pro racer Boris Said Sr., who accompanied his son to Buttonwillow, Said Jr. certainly has a great coach.

“This is so fun,” Said Jr. proclaimed. “I’ve been outdoor karting for two years now, so I naturally wanted to try this. It’s more fun than anything I’ve done. There’s so much to this, and being fast just feels good.”

Said Sr. added that “driving a car on the edge is just an unbelievable feeling.” And he should know. The pro started out driving his car to SCCA events, and has three Runoffs victories to his credit. Then there were triumphs in IMSA, Trans Am, NASCAR and more, as well as success at legendary circuits such as Daytona, Bathurst and Nürburgring. But coming back to his SCCA roots with his son is something special.

“SCCA is a great experience,” Said Sr. explained. “The people are great and there’s good camaraderie.”

That fellowship was evident Friday after the first qualifying session. Said’s car had left-front bodywork loose, and the father-son duo had the car jacked up and were wrenchin’ away together to remedy the problem. Another attendee paddocked next to the Saids saw they could use a hand and jumped in to  assist.

While it would be easy to understand that Boris Jr. has big shoes to fill, he’s still new to SCCA competition and is wisely just enjoying the experience for now and waiting to see where things go.

“I’d obviously love to go as far as I can go, but it’s so early right now. This is only my second race,” Said Jr. recognized. “But we are going to try to go to the Runoffs at Indianapolis this year. That’s our goal.”

Before that, the Saids plan to be at a few more SCCA races this year along the West Coast. And as far as Said Sr. is concerned, that’s all part of the learning experience in a class as competitive and approachable as Spec Miata.

“Right now, we’ll just see where this goes. We’re having a blast together,” Said Sr. stated. “Last year at Road Atlanta, I was racing Trans Am and he was in a Spec Miata race. That was the most nervous I’ve been at a racetrack. But watching him in the karts and watching him on track this weekend is one of the happiest feelings of my life, even more than winning the 24 Hours of Nürburgring or Daytona. It’s a thrill for me and I’ve really enjoyed it.”

So, does Dave Lemon have any tips for Boris Jr. and his father?

“You want me to tell Boris Sr. what to do?” Dave said with a laugh. However, he’s being modest as Dave also spent some time sharing a car back in the early 2000s with his daughter, Brieana, whose name is still on the Mazda RX-7 being run this weekend.

“I tried to coach her, but she didn’t want to listen to me. Daddy was being overbearing,” Dave recalls. “You’re going to work your butts off … but also have fun. Have fun.”

And that seems to be a focus for the Saids. As the younger Boris sat on grid before the first qualifying session Friday, papa Said rode by on a bike, looked into the driver’s side window and said, “have fun, bud.”

Be sure to follow all the “fun” from this weekend’s Hoosier Super Tour at Buttonwillow with live timing/scoring, static cameras and Super Tour Radio presented by Hoosier Racing Tire at www.scca.com/live.