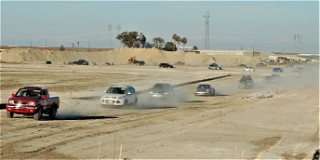 It’s been a long time in the making, but those attending the Hoosier Racing Tire SCCA Super Tour this weekend at Buttonwillow Raceway Park were treated Friday night to a lead-and-follow trip around the new 2.579-mile, 10-turn “Track 2” circuit currently under construction alongside Lerdo Highway to the northwest of the current track.

More than 30 passenger-filled cars made a slow, dusty parade lap at dusk to get a firsthand glimpse of the new layout that meets all the highest FIA track-specific standards and will be completed before an inaugural event planned later this year, according to Buttonwillow Raceway Park President Les Phillips.

The Track 2 front straight through the first turn is 50-feet wide, and all of the remaining length is 40 feet in width. The “native ground” is near flat, but three hills of varied elevation change have been constructed for additional interest. Plus, the rubberized asphalt to be laid soon will offer superior grip and be a lot easier on tires.

“We first thought about a second track well over 10 years ago,” Phillips stated in a recent Racer.com article. The story goes on to note that Track 2’s facilities will include its own race tower, museum, food services and bathrooms. Although, competitors might have to drive through the paddock to the original circuit for race fuel and a tire service station.

So, what are some of the early impressions offered by a couple competitors racing this weekend at the Buttonwillow Hoosier Super Tour?

“What I was looking for was passing zones,” said Spec Racer Ford Gen3 (SRF3) driver Noah Hambayi. “A lot of American tracks tend to be very windy. And for cars that can maintain speed in faster corners, it’s very hard to pass. But we saw maybe two or three really good passing opportunities. I like the banking, and it looks like there will be some fast sections and some slow sections. And it looks like it will be a pretty technical track.”

Another SRF3 driver, Lee Douglas, noted that “there’s some good elevation changes, which is nice in a track. Plenty of width for passing. It will be interesting to see what it’s really like when complete and when you get out there.”

Nick Coe, a Formula Continental driver, chimed in with feedback from the open-cockpit crew, stating, “I was impressed. It’s a very flowing track and I like all the banking in the turns. It seems like there’s plenty of width for passing.

“I find the original Buttonwillow track has its quirks and tricks to it,” Coe continued. “This new track seems to be more driving focused. There’s definitely going to be some areas that will be a test of your courage.”

Let’s not forget about the Production racers out there. Daniel Snow, an F Production driver, said, “I love the banked corners. It looks like a lot of fun. It’ll be a good track for learning because it’s not too crazy. But it has some fun twisty bits and some fun straightaways. To me it looks like a kick in the pants.”

When it comes to a new layout, feedback from safety workers is equally important. And who better to get feedback from than Mark Smith, a multi-time Runoffs Flag Chief and Worker of the Year. He said when it comes to safety, the consideration is not just what flaggers need but what drivers need, too.

“We’ll be using drivers and experienced corner workers to make sure we put stations in the right spots,” Smith said. “The key thing is to make sure drivers can see the flaggers. We are going to elevate the turn stations … to get the corner workers up and safe -- and the added height will give them visibility.”

A barely noticeable but added feature of interest for the newest portion of Buttonwillow will be the Giant Kangaroo Rat preserve positioned in the layout’s very center. Some years ago, a Giant Kangaroo Rat was found on the property. As an endangered animal, habitat had to be left for the critter.

“State and Federal entities have required Buttonwillow’s new layout to conserve space for the ancestral ground of the Giant Kangaroo Rat. As such, we’ve now got a track designed for both rats and Track Rats,” Phillips joked.

While Buttonwillow’s next great evolution sits just on the horizon, the venue and Cal Club’s focus this weekend is the Hoosier Racing Tire SCCA Super Tour. Be sure to follow all the action all weekend with live timing/scoring, static cameras and Super Tour Radio presented by Hoosier Racing Tire at www.scca.com/live.

Click on the video below to experience a trip around Buttonwillow’s new Track 2 with multi-time Runoffs champion and Buttonwillow Business Development Manager Mike Miserendino hosted by SportsCar editor Philip Royle.

Photo: A dusty caravan makes its way around the new Buttonwillow “Track 2” layout during the Hoosier Super Tour weekend.