Bob Pisarek: Mechanic of the Year and More 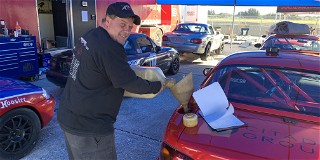 This is a story about Bob Pisarek, the 2020 Mechanic of the Year.

Except most times, what seems to be the story is actually part of a larger story.

So yes, Bob Pisarek is a deserving SCCA Mechanic of the Year. Let’s get that out of the way. A multi-time SCCA Runoffs championship-winning prep shop, Advance Autosports is also one of the paddock’s “super teams,” with customers at seemingly every SCCA event, and Pisarek is in charge of the team that keeps those cars on track.

“Bob is at the track every weekend and probably sees us more than his family and just pours everything into trying to make sure these customers can come out and race and have a good time,” Ben Merwin, who runs Advance Autosports with Pisarek, said.

Drivers echo the same thing. The nomination form mentioned his commitment to fun, to safety, and to performance – and while performance is important, it’s never at the expense of the other two.

So yes, this is a story about Bob Pisarek, who earned the 2020 SCCA Mechanic of the Year by working almost every weekend with a smile. But it’s hard to tell the story about Pisarek without also telling the story of Dave Wheeler and Ann O’Malley.

Dave Wheeler was synonymous with Advanced Autosports. For many, he remains so, and for almost 30 years, he was Advanced Autosports. Wheeler started the company in Beloit, Wisconsin, because he loved racing. Over time, the program grew, including more than 150 Spec Miatas, always the bread and butter of the organization.

From the beginning, Wheeler was one of the apostles of the class, spreading the gospel of Spec Miata to anyone who would listen. He brought his wife, Ann O’Malley, to the sport and made her an integral part of the business. He served on the rules committee, committed to growing the class. He literally wrote the book on the class, penning “The Spec Miata Constructor’s Manual” for others to reference.

Just when it seemed Advanced Autosports was at its peak, tragedy struck. First, Ann passed away from a rare brain tumor in February of 2018. Just 10 months later, a second cancer recurrence claimed Wheeler.

Because Wheeler treated employees and customers like family, the entire business was grieving. Now what?

See, Wheeler treated his employees and his customers like family. That gets tossed around a lot, but in this case, it was true. Why? Because in some cases, his employees actually were family.

So where were we? Bob Pisarek, Dave Wheeler, Advance Autosports – oh yes, legacy. Quite possibly the one thing that, as an individual, you can’t control and is left up to those who follow you. So while we’re telling the story of legacy, we have to add the story of Ben Merwin.

As much as Wheeler loved Advance Autosports, he loved his daughters even more. Enter Merwin, who married Michelle – the eldest of Wheeler’s daughters.

When the world lost Wheeler, it would have been easy to shutter Advance Autosports right then and there. But that didn’t quite fit with everything Wheeler had built.

“It would have been a shame to just throw all this away,” Pisarek said. “I talked to Ben, Ben talked to his wife, and we got together and said we’re just going to make it work. We’ve gotten bigger, and it’s great!”

Merwin, for one, had no doubt that Advance Autosports would continue – with one giant caveat. Pisarek had to be involved.

“After Dave passed away, I had a conversation with Bob and said I can’t make this work without him,” Merwin said. “We had a lot of people who were unsure about what was going to happen, so just having that assurance that there was some consistency allowed us to do well. And they rallied around us and we were able to grow.”

Pisarek, Wheeler, Advance Autosports, legacy, Merwin – it turns out that this is actually a story about passion. Passion for motorsports, for SCCA, for those who race, for a boss, friend, father and mentor who passed away to soon. To growth and advancement.

And yes, Bob Pisarek was presented the 2020 SCCA Mechanic of the Year award at this weekend’s Hoosier Racing Tire SCCA Super Tour at Sebring International Raceway, on the podium in front of his team and the entire class. And yes, he deserved the award for his mechanic skills in 2020. But he deserves the award for his work for others – his customers, the sport, the Sports Car Club of America, his business partner, and his late boss.

“It’s an honor and a privilege,” PIsarek said. “I’ve been with the company 13 years. The late, great Dave Wheeler and Ann O’Malley took a chance hiring me. I have to thank my wife, especially, for putting up with me being gone for 32 weeks of the year. My kids, my grandkids – the whole team at the shop. This doesn’t take just me, it takes all of us.

When Pisarek said that, he was talking about the Mechanic of the Year award. But like so many stories, at its core it was about so much more than that.