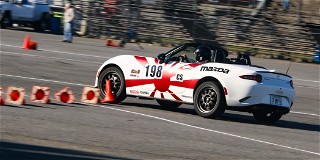 It was a late finish to the 2020 Tire Rack Championship Tour season, but a December run at the Dixie National Tour was a huge success! A strong 162 entries descended on South Georgia Motorsports Park in Adel, GA for the winter weekend.

The weather looked ominous leading up to the weekend, but the worst was a rain shower during Friday’s afternoon course walks. The highs stretched into the low 70s during the weekend, picture-perfect for the first weekend in December.

On the course, a tight battle in E Street captured viewers’ imaginations with Kerry Coughlin, Timothy Maxey and William Bostic neck and neck. Bostic had the raw time for the win, but cone trouble on both days left him third. Coughlin took a 0.853-second win over Maxey in the class, with Bostic third.

Five different Mineharts took on the full E Modified world in the class of 12, but the field came out on top thanks to Nathan Gordon. Gordon bested the Minehart they call Jason by 1.244-second and the one who goes by Scott by an additional 1.069-second to take the win. Of course, Gordon was piloting a 2014 Stalker, a car design that the Minehart family is very close to since Scott heads up the company.

Tongue-in-cheek, it’s poor etiquette to beat a car owner in his own car. But if you must, make sure you win – just like Mike King in Solo Spec Coupe, who topped Steven Hughes by 0.371 second in the class of six.

CAM Contemporary was a Mustang battle, but the question was whether the GT350 or the GT500 would come out ahead. Randy Adkins settled that question by taking the day one lead, and then holding on for the win in a GT350. John Ward’s GT500 was just 0.354-second behind, followed by co-driver Jeff Cox and a second GT350 driven by Stephen Tyszka.

The thriller of the weekend came in Super Street Modified. Randall Wilcox came to the line for his final run knowing he needed a half-second to knock off Ian Stewart, and then promptly went out and laid down enough for a 0.113-second class win. This time, the Miata came out on top in what was otherwise an all-Corvette class.

The 2021 SCCA Tire Rack National Solo schedule is nearing completion and will be announced in the coming weeks. Check back to SCCA.com/autocross for more soon!