10 Steps To Fulfilling Your Motorsports Dreams 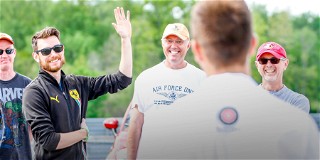 Our partners at Grassroots Motorsports Magazine are car people through and through. Which means they get what we do around here. So when we saw this article from David Wallens, Editorial Director, we thought it was worth sharing. At one point all of us have known what we wanted to do, but struggled with the "how." Sometimes finding the how is hard, that's why we try to make it easy. With programs like autocross, RallyCross and Track Night in America, it's easy to get started, even if that first step is just a parade lap. And just like David says in Step 4, bring a buddy. Everything is more fun with a friend, including cars.

The following article was originally published in the June 2015 issue of Grassroots Motorsports Magazine and shared through grassrootsmotorsports.com. Catch all of their great content by subscribing.

Like many of us, the first vehicle I proudly owned was my bicycle. Sometime around my 13th birthday, I had finally saved up the money to buy a real BMX bike.

One of our local shops had a pretty sweet deal. For about $300 they’d build up a pro-quality frame with decent components–not quite top-shelf parts, but they sent you out the door with a great foundation.

I spent the next three years honing that chrome-plated MCS frame into my dream bike. I’m a researcher by trade, so each component purchase was preceded by agonizing analysis–or, as we called it back then, reading BMX magazines. Plus, working at a bike shop had its perks.

Sometime before my 16th birthday, I ate it hard at the Shoreham BMX track. My left arm broke my fall, but the fall also broke my left arm. The bike was parked while I was in a cast, replaced by a Honda scooter.

Up until that X Games-quality shunt, how would I describe my bike skills? Not great. Slow, actually. I once did a backflip on a guy’s backyard ramp–not on purpose, mind you. One of my shoes flew off in the ensuing wreck. The dude’s golden retriever ran off with my checkerboard Vans sneaker.

My attitude, though? Totally loved the sport, and I still support it with every fiber of my being. I built up Dream Bike 2.0 for my 30th birthday, and I think the next one will be done in time for my 45th.

Last weekend I watched a skate park contest with Super Dave, my BMX riding buddy from 20 years ago. He still rides, and his day job places him as international sales manager at Sparky’s Distribution, one of the biggest names in the BMX world. And he autocrosses, too.

From the sidelines we watched kids–and adults–do things that the 14-year-old versions of us never thought possible. We enjoyed some cold drinks, he introduced me to new friends, and I shot photos and video. The biggest thrill for me: sharing those videos and images with the guys and girls riding the bikes.

My other passion? Guitars. That one PRS I purchased three or four years ago has since been joined by more: six-strings, basses and even a baritone. How many? Yes.

My skills? I am way better at purchasing gear than playing it. I admit, though, the hobby has opened up an entirely new world and introduced me to some amazing people.

How does this tie into cars? A while ago, a friend mentioned that he’d like to autocross but didn’t have the right car. As he lamented, he only owned a six-speed Acura TSX.

That is all the car he needed. Why? Because it doesn’t matter. No matter what, Geddy Lee is always going to sound at least a zillion times better than I do. He is a real musician, and Rush can fill any arena on any day. I can barely make it through a three-chord punk song.

So back to the popular question: How do I find the best car for my first forays into motorsports? Listen to David the editor, not David the hoarder. First, the car you have is likely good enough. See, we’re already on the homestretch.

Step 1: Find a local event. How? Flip through the newest issue of Grassroots Motorsports or check out websites like motorsportreg.com. Many of these same organizations host autocrosses and rallycrosses as well, which are also fine points of entry.

Step 2: Find a club that hosts events in your section of the country. In this day and age, most have websites featuring their schedules. There are so many great clubs out there, and each has its own vibe. Whether it’s NASA, SCCA, PCA or one of the many others, you will be in good hands.

Step 3: Pick an event that’s near you and mark it on your calendar. If registration is required beforehand, might as well do it.

Step 4: Bring a buddy. In fact, I should trademark that: Bring a Buddy™.

Step 5: Follow our beginner’s guide regarding car prep and stuff.

Step 7: Have the time of your life.

Step 8: Tell your friends. Remember to use #grmphoto for all of those Instagram photos. (And since you’ll be so excited, yes, go nuts with all of the filters and effects.)

Step 10: Email me a note. I want to hear about all of the fun you had, all of the friends you made, and all of the things you learned.

While we all like to fuss over the latest tires or fastest Speed Widget™–see, I’m not the only one–really it comes down to the nut behind the wheel. Duffer or not, go out and play. Don’t let that next track day or autocross intimidate you.