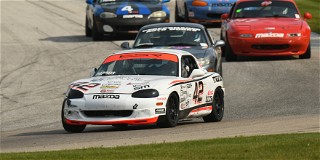 Preston Pardus started ninth, fell as low as 13th, and snuck his way to a Spec Miata win in a wild 77-car field on Friday at the 57th SCCA National Championship Runoffs at Road America—with an assist from second-place Konrad Czaczyk. Rob Hines was in position to earn his second bronze medal of the day, just behind Pardus and Hines.

The race restarted after the second of two full-course cautions with just two laps to go in the 13-lap race. As the field came to the white flag signifying the final lap, the three podium finishers ran in fifth (Czaczyk), sixth (Hines) and seventh place (Pardus).

Pardus, of New Smyrna Beach, Florida, entered Turn 5 on the final lap still in seventh place, and exited in fourth place after then-leader Todd Buras was pushed wide. That momentum carried him into third as the lap progressed, putting him in position to move around Cazczyk and Tony Brown for the lead exiting Turn 12. Even so, the win wasn’t secured until Cazczyk pushed Pardus up the hill to the checkered flag, with all three podium finishers clearing a lame-duck Brown running the left side of the track all alone.

“Coming through 14, it’s so hard because you’ve got to give people respect,” Pardus said. “I think I gave Tyler enough room there and luckily it lined me up perfect with Konrad on the exit. I could kind of play the mirror a little bit and try not to block, because you can’t do that.”

The win was the second in Spec Miata for Pardus and his No. 42 Danus Utilities/East Street Racing Mazda Miata, joining his 2017 Indianapolis Motor Speedway title. This win claimed the SCCA Super Sweep for Pardus, which goes to a driver who wins the Runoffs, Hoosier Super Tour point championship, and U.S. Majors Tour Conference championship in the same class, in the same year.

“I thought we were out of it completely,” an emotional Pardus said after the race. “We were sixth and seventh, about a second back, and then the leaders got together. I didn’t really think about running third down the back stretch. I pushed Konrad up. Tyler’s got an East Street Motor, so I wanted to help him out, but the lane to go was Konrad’s. I sent him into Canada a little deep and snuck under with that crossover. Right when I did it, I thought that was a terrible move. I thought we were going to wreck all three of us. Luckily, Konrad saved me coming up the front stretch.”

Tire Rack Pole Award winner Kyle Greenhill was the official leader for the opening eight laps of the race before giving way to defending champion Todd Buras until Turn 5 on the final lap. No matter who was at the point, Czaczyk held steady in the top three from his sixth starting position.

“Who would have thought that starting that lap fifth, sixth and seventh that we’d be on the podium?” Czaczyk said. “That’s Spec Miata racing. It actually was beneficial to us at the end of the day, we could take advantage of the mistake that they had made in [Turn] 5. Going into Canada Corner, I said I’ve got to send it. We ended up going three-wide through there, which was sketchy, but we made it work. Coming into the last corner, I picked Preston, thinking to myself this is my best chance at second. I gave him a good shove, and thankfully I got a good shove from Rob there.”

That consistency, especially as one of the only NA-generation Miatas in the field, allowed Czaczyk to be in position for the final lap’s craziness. The podium was the first of the Jupiter, Florida-native’s Runoffs career.

“It’s unbelievable,” Czaczyk said. “I thought we would be quick here, but I didn’t expect to be finishing in the top five here, let alone the podium. You look at the whole field, and how many NAs are there? It’s clearly not the favorite platform. It’s what we’ve got, and it’s what we make do with. I think at this track it worked really, really well. It feels great to be here.”

Hines steadily made his way from his 13th position on the grid, taking advantage of the opportunities given and keeping his No. 4 Mazda Miata clean until the final lap. It followed a third-place finish in the Touring 3 race earlier in the day.

“I’m going to have to watch the replay for all of it, it was quite a race,” Hines said. “You never know what’s going to happen in a Spec Miata race. You just hang in there and keep pushing. A couple of guys, unfortunate for them, went off and we just worked our way through. Coming out of the corner, we had two guys going side by side. Preston made the hole and we just followed him through. It was a super exciting race. That was the most crazy race I’ve ever been in.”

Brian Henderson, who began the final lap in second place, finished fourth after chasing the podium finishers up the hill. Brown crossed the stripe in fifth. Buras, who officially led laps nine through 11, came home in eighth, while Greenhill, the polesitter who led the opening eight laps, finished a lap down after contact, in 58th place.

Marcos Vento earned the Sunoco Hard Charger in impressive fashion, improving a whopping 34 positions from 65th on the grid to 34th at the checkers.