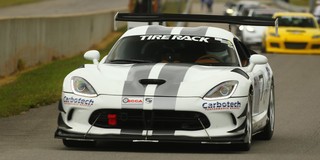 For the second year in a row, the practice day – three 20-minute sessions on the tricky 3.15-mile NCM Motorsports Park track – has been a partnership between Holley Performance, based in Bowling Green, and the SCCA. The Holley-Day, as it’s been dubbed, is each driver’s chance to learn the track and knock off the rust before Friday’s competition.

As has become a tradition, Holley spends the evening welcoming competitors with a barbecue dinner. While the 2020 version looks a little bit different, with food to-go and masks around the facility covering smiles, the feeling is the same.

Custom Formatting: Time Trials Nationals looks like no other event the SCCA puts on. Groups are broken down by both experience level and speed – which means most often, those you are on track with are not those you are competing against.

That actually helps everyone at the event, as it’s a true team test. The emphasis at a Time Trial event is on getting the best lap possible, so drivers utilize spacing and point bys.

Saturday changes gears completely. During those Track Sprint sessions, only a portion of the track is used, and it’s attacked from a standing start, autocross style.

Finally, on Sunday, the groups get even smaller – but the time gets shorter. While the smaller group means, at least in theory, more room on track to turn your lap, the shorter time also means it has to be done right away.

King of the Mountain: As an ancient Greek philosopher once said, “To be The Man, you gotta beat The Man.”

Well, somebody said it, at least. And when it comes to Time Trials Nationals powered by Hagerty, Chris Ingle is most definitely The Man.

Ingle has been the overall top finisher two years running in his essentially stock Dodge Viper. The evolution of the event most likely means his days at the top are numbered, but that hasn’t slowed his enthusiasm.

“My car is more or less a stock Viper,” Ingle said. “There’s going to be guys in cars out there that are just nuts. I saw it last year out at COTA when I did Super Lap Battle. All I’m trying to do is be the fastest basic production car. There’s going to be some crazy stuff out here, and you just do what you can do. For the past two years I’ve won it, yeah, there’s a target on my back. So be it. It’s better than not!”

Ingle has combined a good car and some pretty great driving into a few opportunities. Part of the prize he earned last year was a free entry into the aforementioned Super Lap Battle. With many of those professional-level, full build track cars making their way into SCCA’s Time Trials program, Ingle is content where he is.

“Driving is driving, racing is racing, whether you’re doing wheel to wheel or time trials or whatever,” he said. “I didn’t want to butcher this car. I didn’t want to strip it. I still drive it to work a couple of times a week. This is a good compromise for me. It’s in between autocrossing, driving it on the street, and wheel to wheel racing. I love getting on the track. I’ve been doing it now for over 30 years. It’s phenomenal. I just love getting on track.”

Follow Us From Home: The Tire Rack Time Trials Nationals powered by Hagerty continues all weekend long from NCM Motorsports Park in Bowling Green, Kentucky. Sitting in the shadow of GM’s world-famous Chevrolet Corvette plant and the National Corvette Museum, the track is challenging and technical. Live play-by-play from Gregg Ginsberg and Larry McLeod, with special guest pop-ins, can be heard at SCCA.com – where live timing also resides.